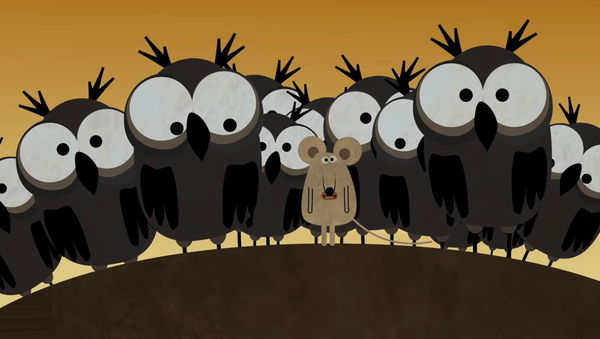 Demond Cureton
All materialsWrite to the author
Applications for the critically acclaimed awards ceremony opened on 6 November, and will see industry professionals from across the country awarded for their work in animated films released in 2019.

The National Russian Animation Awards (IKAR or 'IKARUS') ceremony is scheduled to take place in Suzdal, Russia, on 8 April, 2020, or Russian National Animation Day, its sixth annual run to date.

Soyuzmultfilm Film Studio, Moscow's premiere studio since the Soviet Union, is also a partner of the Award.

Nominees are set to earn awards in best film, director, composer, producer, screenwriter, among others, as well as reocgnising animators for excellence in achievements. The event will unite masters of the trade, as well as aspiring young professionals, film school students and celebrities.

The ceremony stage and hall will be decorated in the style of the "golden era of films from Soviet animation", according to a IKAR spokesperson.

Legendary Russian animator and producer, Andrey Khrzhanovsky will be honoured for his contributions to the Russian film industry. His short film, "This is the House That Jack Built", is based on a British cumulative tale with origins in the 1500s, and remains one of his most popular works.

The ceremony will also feature a fresh "jam-revue" animated short from various directors, with the style debuting in Russia with the release of "Owl Me Tender" at the first IKAR Awared ceremony in 2015.

A Brief History of Russian Animation

Natalia Ivanova-Dostoevskaya, Development Director of the IKAR Award, discussed the history of Russian animation, which began on 8 April, 1912 after Mr Vladislav Aleksandrovich Starevich debuted "The Beautiful Lyukanida, or the Barbel War With Stag" featuring a puppet cartoon.

Mr Starevich later emigrated to France during the Russian Revolution in 1917 to become a famous director in Europe, Mrs Ivanova-Dostoevskaya said.

Animations appeared again in Russia in the 1920s with "makeshift" production, she said, and were "political, propaganda films".

Russian animators in Moscow were organised into a single film studio named Soyuzmultfilm in 1936, under orders from [former General Secretary of the USSR] Joseph Stalin, who aimed to shape animation for children and with styles originating from Disney.

"Even today, there is still the opinion in Russia that animation is for children, with the best animation style coming from Disney", Mrs Ivanova-Dostoevskaya said.

Numerous styles and genres began to appear in the 1960s, influenced by European animations, with such important projects as "Glass Harmonica", "Tale of Tales", "The Story of a Crime" and others debuting across Russia.

Despite the fact that animation production stopped in the 1990s, marking a difficult stage for Russia following the dissolution of the Soviet Union, several animators from the 1990s received acclaimed international awards, including Alexij Kharitidi's "Gagarin", which received the Golden Palm Branch award in 1995 and Aleksandr Petrov's adaptation of Ernest Hemingway's "The Old Man and the Sea", which earned an Oscar in 2000.

But with help from the Russian State under President Vladimir Putin, animators revived the country's industry and began to launch private studios, she said.

"There was never an animation industry in Russia before the beginning of the 2000s", she said. "[Russians] did not regard animation as a business; hence, there was no series and merchandising at the time".

However, the situation has changed as numerous famous cartoons such as "Masha and the Bear", "Smeshariki", "Luntik", "Fixies" and the full-length saga of the "Three Heroes" have shaped the modern face of Russian animation around the world.

"Russian authors have been invited to teach at universities in France, Japan and Brazil. At the annual Hiroshima International Animatioin Festival, a large number of Russian directors participate as judges and hold educational programmes," Natalia Ivanova-Dostoevskaya concluded.