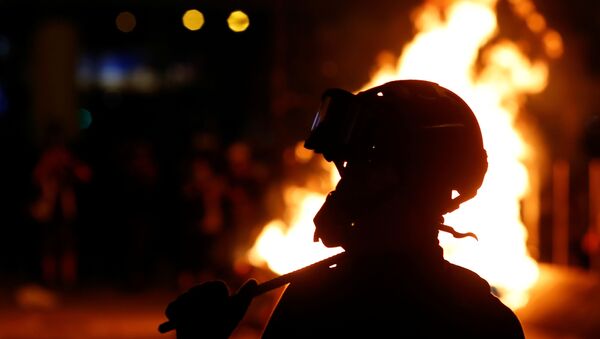 As demonstrations continue and protest-related violence surges in Hong Kong, Western media proceeds to engage in a disinformation campaign by burying the facts and omitting key details pertaining to the unrest in the city.

Tensions between police and protesters in Hong Kong reached a new level on Monday after a 21-year-old student protester was shot during an altercation with police.

“If there is still any wishful thinking that by escalating violence the Hong Kong [Special Administrative Region] government will yield to pressure to satisfy the so-called political demands, I’m making this statement clear and loud here: that will not happen,” she said, as reported by the South China Morning Post.

While this situation is undoubtedly disturbing, the Western corporate media’s one-sided reporting does little to help those consuming it understand the entire picture of the anti-government protests, according to one expert.

K.J. Noh, a long-time activist working on global justice issues, a writer, a teacher and a member of Veterans for Peace, joined Radio Sputnik’s Loud and Clear on Thursday to provide his thoughts on why he classifies Western media’s latest reporting as “terrorism” against Hong Kong.

“I think the chaos is the objective,” Noh said in reference to protesters’ acts of violence. “The … five demands and the discourse around fighting for democracy is simply pretextual, and I really think it is about creating as much chaos, disruption and delegitimization as possible.”

The “five demands” he referenced are the initial points protesters rallied behind, including: the formal withdrawal of the proposed extradition bill, an investigation into alleged police brutality by an entity other than the Independent Police Complaints Council, a retraction of the police’s classification of protesters as “rioters,” amnesty for those arrested over the duration of the demonstrations and dual universal suffrage - which would allow members of the Legislative Council and the Chief Executive to be elected by the people.

Of the demands, the formal withdrawal of the proposed extradition bill is the only concrete achievement to come out of the protests.

While protester numbers have lessened in recent months, demonstration-related violence - particularly toward law enforcement officers and businesses related to Beijing and the rest of mainland China - has increased.

Despite this fact, Western media has virtually ignored wrongdoings committed by demonstrators, focusing solely on situations such as the recent shooting and omitting details pertaining to an incident in which a 57-year-old man was doused with a flammable substance and set on fire by protesters.

Noh explained that the man, an off-duty construction worker with two daughters, “was going to the hospital, ironically, for a routine checkup.” While en route, he noticed “vandals destroying the Metro station” and decided to step in and chastise them. According to Noh, the vandals, who he says were not Chinese, retaliated against the 57-year-old’s words by assaulting him and striking him on the head.

Moments later, he was doused with what is believed to be gasoline and set ablaze by a black-clad individual.

Noh highlighted that despite the man having 44% of his body burned and currently being in critical condition, Western media reported little on the incident aside from the fact that he was set ablaze. Reports concerning the 57-year-old omitted who set him on fire and most of the general details pertaining to the situation.