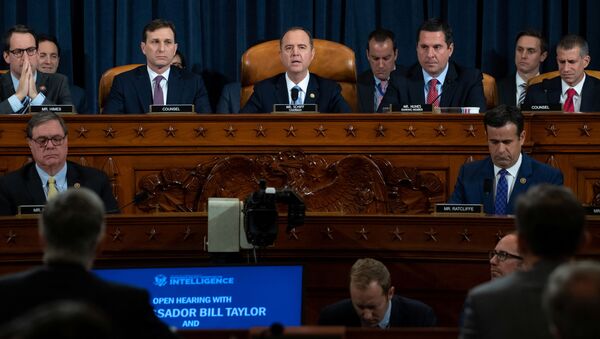 Tim Korso
All materialsWrite to the author
The first hearing was preceded by a series of closed-door depositions by witnesses, some of which were later followed by the release of transcripts. The White House has slammed the Democrat-led impeachment proceedings for lacking transparency and not allowing the Trump administration to defend itself, urging officials not to cooperate.

The US House of Representatives has initiated its first public impeachment hearing into President Donald Trump, which will be broadcast on TV. The first hearing will see Acting Ambassador to Ukraine William Taylor and Deputy Secretary of State George Kent testify before the House Intelligence Committee.

In his opening speech, the head of the committee, Adam Schiff, stated that the goal of the impeachment hearing is to determine whether Trump "sought to exploit [Kiev's] vulnerability and invite Ukraine's interference in our elections" during his telephone call with President Volodymyr Zelensky on 25 July.

"Whether President Trump sought to condition official acts, such as a White House meeting or U.S. military assistance, on Ukraine's willingness to assist with two political investigations that would help his re-election campaign? And if President Trump did either, whether such an abuse of his power is compatible with the office of the presidency?" Schiff said.

The Intelligence Committee's top Republican, Devin Nunes, has in turn slammed the hearing as a "televised theatrical performance staged by the Democrats", in line with the White House's characterisation of the whole impeachment process as a "hoax".

The US House Panel also announced the list of witnesses that it seeks to question behind closed doors in the coming days – US Embassy in Ukraine staffer David Holmes and White House budget office employee Mark Sandy.

Speaking before the committee, Deputy Secretary of State George Kent stated that Donald Trump's personal lawyer Rudy Giuliani and other officials had run a "smear campaign" against American envoy to Ukraine Marie Yovanovitch and tried to "gin up politically-motivated investigations", thus affecting Washington's engagement with Kiev.

Kent also addressed concerns regarding the allegations against Joe Biden that Trump had asked Ukraine to investigate. He stated that he had raised the issue of Biden's son, Hunter, working for the Ukrainian gas company Burisma, which in Kent's opinion created the "perception of a conflict of interest". 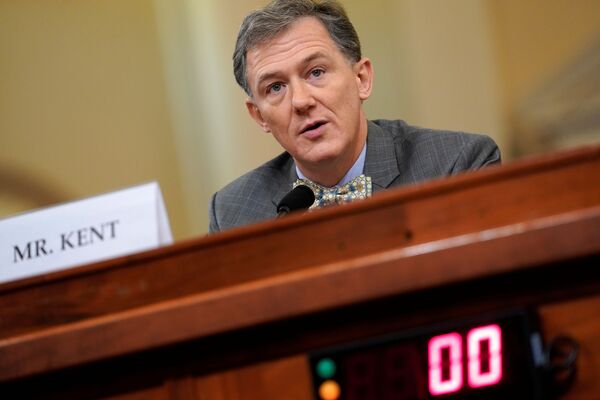 The deputy secretary of state shared that, in his opinion, Ukrainian prosecutors had been bribed to close the criminal case against Burisma, but claimed that he hadn’t witnessed any attempts by the US side to hinder the probe.

Acting Ambassador to Ukraine William Taylor claimed in his testimony before the House Intelligence Committee that there were two channels for the US to exercise its policy towards Kiev, calling one of them "highly irregular".

He believed that the investigation into the Burisma case and alleged Ukrainian interference in the 2016 US election became preconditions for Ukraine’s President Zelensky being granted a meeting with Trump, which he was reportedly seeking. The US ambassador also cited US envoy to the EU, Gordon Sondland, as allegedly saying that "everything" regarding Ukraine, including the military aid, was dependent on the country's president publicly declaring that probes into Burisma and Bidens would be opened. 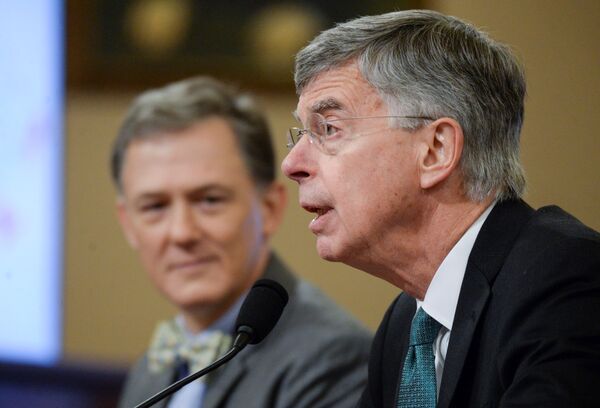 Taylor further claimed, citing a White House budget official, that the order to put US aid to Ukraine on hold came from Trump via his Chief of Staff Mick Mulvaney. The US diplomat also revealed that according to Zelensky's advisers, the Ukrainian president didn't want to become an "instrument" to affect 2020 US presidential election.

Allegations of Trump Abusing His Power

Impeachment proceedings were initiated by the House Democrats following a whistleblower complaint that alleged Trump had abused his power in a telephone call with his Ukrainian counterpart on 25 July. Democrats believe that Trump withheld US aid to Ukraine in order to "pressure" President Volodymyr Zelensky to start a criminal probe into Joe Biden, a former vice president and potential opponent in the in 2020 presidential election.

Trump dismissed the impeachment as a "witch hunt", arguing that his conversation with Zelensky was "pitch perfect" and released a transcript of the talk to prove his point. According to the text, Trump indeed expressed interest in allegations of misconduct by Biden during his time as vice president in 2016 being investigated, but it provided little evidence of claims that the POTUS had applied pressure on the Ukrainian president.

000000
Popular comments
They are not doing any of the work but they are ruling that country. Now, who knows, who the bastards are.
cmat.wolfgang
13 November 2019, 21:22 GMT3
000000
3 years of FIXING trump has not accomplished anything. Trump needs to be fixed not impeached. Impeachment is a bunch of questions that has bunch of nonsense answers. and the kind of guy he is is not going to quit like Nixon.