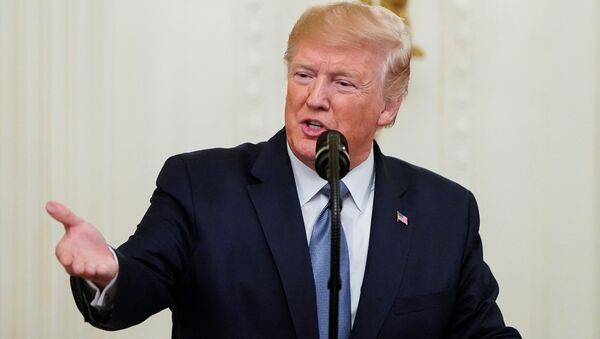 © REUTERS / JOSHUA ROBERTS
Subscribe
International
India
Africa
While speaking at a Jewish gathering in New York, President Donald Trump not only mocked Israel’s two elections over the past year, but also revealed his plan B if “anything happens here”.

US President Donald Trump on Tuesday indulged in a bit of mockery of Israel’s political limbo at a Jewish event, laughingly assuming that if he is impeached, then he could move to Israel and become prime minister with a perfect rating.

“We work hard on Israel, I think I have an approval rating of about 98 percent [there]”, Trump said.

“If anything happens here”, he started off in a likely jab aimed at US Congress’ efforts to impeach him, “I’m making a trip over to Israel and I’d be prime minister there very soon”, he continued, with the comments meeting a storm of applause.

“What kind of a [political] system is it over there, right? They are all fighting and fighting”, Trump said, addressing the Orthodox Jewish organisation America First’s event held in New York City.

“We have different kinds of fights. At least we know who the boss is”, POTUS contended, going on to quip about Israel’s two recent snap elections (and the expected third one) that yielded no definite winner:

“They keep having elections and nobody is elected”, he said, shrugging his shoulders.

The US president avoided bringing up the launch of around 200 rockets against Israeli cities from the Gaza Strip on Tuesday, although mentioned that “there are a lot of things happening over there that aren’t very good”.

The comments came as the House Democrats’ impeachment inquiry against POTUS Trump is in full swing, with a number of officials set to testify in front of Congress in the coming days. The first televised public hearings are due to kick off on Wednesday.

The formal proceedings are centred on allegations that Trump’s July phone talk with his Ukrainian counterpart Volodymyr Zelensky may constitute abuse of power, as he welcomed Ukraine looking into the alleged corruption of his potential 2020 rival, former Vice President Joe Biden and his son Hunter while in Ukraine. Donald Trump outright denied the claims, arguing that the call was absolutely benign and further welcoming other countries to likewise look into the Bidens.