Will Voters Go Green? Party Hopes to Cash In on Climate Emergency and Triple MPs in UK Parliament 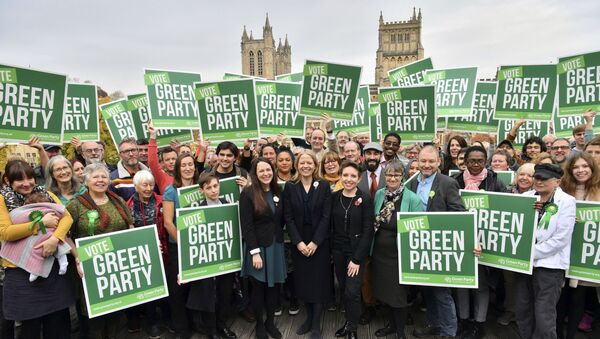 © AP Photo / Ben Birchall
Subscribe
International
India
Africa
The Green Party currently has one MP - Caroline Lucas - but is hoping the 2019 election will see a massive boost in its vote. But how realistic are their chances of winning other seats?

The Green Party in Austria are set to form part of a coalition government after the ruling Austrian People's Party opened negotiations with them on Monday, 11 November. Britain’s Green Party can only dream of having such power in the UK Parliament.

They currently have only one MP - Caroline Lucas, who has held Brighton Pavilion since 2010 - but are hoping they could double or even triple that representation in the new Parliament.

Their primary targets are Bristol West and the Isle of Wight.

So thankful to @WFRGreens for standing aside in Chingford & Woodford Green and supporting me to #UnseatIDS
I will continue to fight hard for climate policy & democratic reform!
I end this weekend more hopeful than ever!#VoteFaiza #VoteLabour #GE2019 https://t.co/T9JKXNHebu

​The party, whose leader Sian Berry promised to spend £100 billion on reducing carbon emissions, is pinning its hopes on the Climate Emergency having energised not just young voters but also middle class and socially responsible voters who might have previously voted Labour or Liberal Democrat.

The Green Party had a good year at the European and local elections and now have seven MEPs and 362 councillors.

We can't afford parties who'll tinker around the edges while supporting fossil fuels and airport expansion. Only a Green vote in Bristol West is a vote for the action necessary to address the climate emergency. https://t.co/KsiYG9cDpp

​They have also signed an electoral pact with the Liberal Democrats and the Welsh nationalist Plaid Cymru which they hope increases their chances of winning votes from Remainers in key target seats.

But they still have a mountain to climb because of Britain’s first-past-the-post system.

Even though the Greens are on course to win five percent of the popular vote, that is unlikely to translate into anything like five percent of MPs in the 650 constituencies.

If you’re smart, you’ll all vote for the Green Party.

In Bristol West their candidate, Carla Denyer, has to overturn a Labour majority of more than 37,000.

But Bristol West’s electorate is extremely fickle - in 2015 the Greens increased their vote by 23 percent and came within 5,000 votes of winning but two years later it fell back and Labour MP Thangam Debbonaire increased her vote by 30 percent.

Carla Denyer will be pinning her hopes on student voters who have been enthused by the Extinction Rebellion protests and may have been put off Corbyn’s Labour “project” by anti-semitism allegations and by it sitting on the fence over Brexit.

I’m sad to say I cannot vote for the Green Party now. The Libdems record is atrocious. Heaven knows why they did it. #greenclanger https://t.co/BAD4IJmyHs

​She told The Guardian last week: “In the 2017 election a lot of people were Corbyn fans in Bristol but they are going off him. A lot of people believed in 2017 that Labour was a Remain party. I think the political atmosphere is much closer now to 2015 than it was in 2017.”

I’m impressed by the Lib-Dem and Green candidates who say ‘I demand we stay in the EU. That’s why, in an area where I can’t win, I’m standing against the party that wants a 2nd referendum, allowing a Tory to win so they take us out of the EU’. It’s quite philosophical in its way

​Her hand has been boosted by the “Unite to Remain” deal which meant the Liberal Democrats - who held the seat as recently as 2015 - would not field a candidate. The unlucky man was James Cox, who has been asked to step aside to boost the Greens’ chances of winning.

On the Isle of Wight the Greens are mounting a strong challenge to Conservative MP Bob Seely, who had a 21,000 majority last time round.

The Liberal Democrats, who got almost 3,000 votes in 2017, are not standing and the Green candidate Vix Lowthion is hoping to overtake Labour and take the seat.

​Last week Simon Letts, Labour candidate in Southampton Itchen, a constituency where the Conservative MP had a majority of 31 at the last election, said he was hoping for a deal where the Greens - who garnered 725 votes in 2017 - would be persuaded not to stand there in exchange for Labour not fielding a candidate on the Isle of Wight.

But Labour’s Shadow Chancellor John McDonnell ruled out any electoral pacts at a rally in Liverpool on Thursday 7 November.

The Greens are also looking to boost their support in Wales but they would need to increase their vote exponentially in order to challenge, even in their top targets seat - the Vale of Glamorgan.

Handed in my nomination papers - now the official candidate for @TheGreenParty to be the next MP for the #IsleofWight . 2nd highest Green vote in the entire UK in 2017 , strong 2nd in MEP elections, @unitetoremain candidate and Conservatives pledging support every day #VoteGreen pic.twitter.com/O2jJHpPW2L

​The strongest Green Party in Europe has historically been in Germany, where they benefit from the proportional representation system of voting.

In 1998, having secured only 6.7 percent of the vote, they secured 47 seats in the Bundestag and went into coalition with the ruling Social Democrats.