US Wants to Create Illegal Quasi-State in Eastern Syria - Lavrov 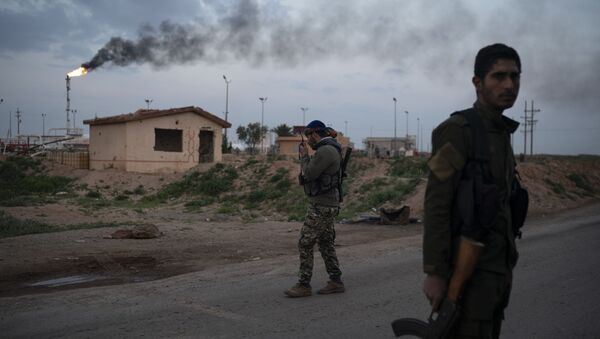 © AP Photo / Felipe Dana
Subscribe
Damascus, Moscow, Ankara and others have repeatedly criticised US efforts to continue to hold onto oil-rich areas of Syria, saying such actions are in blatant violation of international law.

The United States is looking to illegally separate territories on the eastern bank of the Euphrates and create a separate, illegal, quasi-state there, Russian Foreign Minister Sergei Lavrov said, speaking at the Paris Peace Forum on Tuesday.

"On the eastern bank of the Euphrates River, they are doing everything possible to create the structure for a quasi-state, and are asking the Gulf States for major investments in order to create a local administration on the basis of the Syrian Democratic Forces, the Kurds - the YPG People's Protection Units and others, with the clear intention of breaking this piece of territory off from Syria, and controlling the oil fields located there," Lavrov said.

At the same time, Lavrov accused the US of prohibiting its allies from investing in Syria's reconstruction.

"When it comes to Syria's reconstruction, we, together with the Syrian government, support inviting everyone [to participate], in creating conditions for the modernisation of infrastructure and the return of refugees, so that the country can return to a normal life. The United States categorically denies the need for this, and prohibit its allies - NATO, the European Union, countries of the region, from investing in any projects in the territories controlled by the Syrian government," the foreign minister said.

Last Year, Syrian authorities estimated that between $200 and $400 billion in investment, and up to a decade would be needed to rebuild Syria following the conflict. The US and its European allies have refused to commit to funding reconstruction efforts, although many European countries are facing major social tensions, due to the influx of Syrian refugees into Europe. 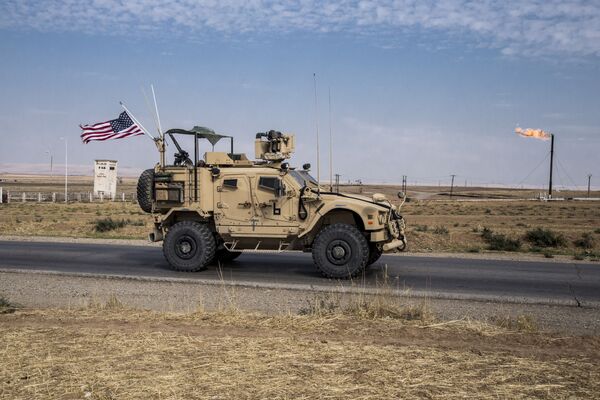 In his remarks on Tuesday, Lavrov urged Syria's Kurds to take part in the political dialogue on the situation in the country but called on Kurdish representatives to be consistent in their position.

"If from the start of the conflict, they decided that they can act with US support, when they announced the creation of the Rojava Federation, and that the US would provide them with support in a movement toward separatism, this was their decision," the diplomat said. "We attempted to explain to them, and the Syrian government, that it is important to begin a dialogue between Damascus and the Kurds. The Kurds did not show interest in this. They were convinced that the United States would always support them," he added.

Lavrov lamented that although Kurdish authorities did ask Moscow for assistance in starting a dialogue with the Syrian government, as the US announced its partial withdrawal from eastern Syria in October, they appeared to lose interest in such dialogue once the US said that they would return to the war-torn country to control its oil fields.

"I have no doubt in my mind, that a solution to the Syrian process can be achieved, only if the interests of the Kurds, and all of Syria's ethnic groups, are taken into account," stressed Lavrov.

With regards to Syria's Kurds, the Damascus government has repeatedly spoken out against the creation of any special autonomy for the country's Kurds, citing Syria's multi-ethnic and multi-confessional nature. 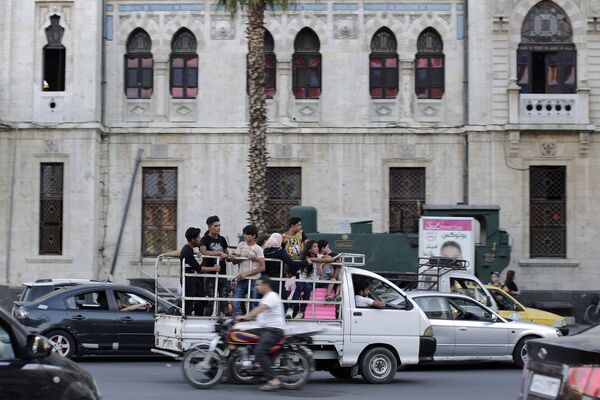 People ride in the back of a pickup truck in the Syrian capital Damascus, Syria, Wednesday, July 24, 2019.
© AP Photo / Hassan Ammar

Over the past several weeks, US President Donald Trump has repeatedly said that the US would be "keeping" Syria's oil, with the Pentagon clarifying that the mission of the US military in Syria will now include preventing the country's oil stocks from falling into the hands of either terrorists or the Asad government.

Trump's comments brought him widespread condemnation, including among his opponents at home, who warned that taking another state's natural resources, violates international laws against pillaging.

Commenting on President Trump's comments regarding Syria's oil, Syrian President Bashar al Assad said that the US president's policy was nothing new, with the US government, the CIA and others involved in the smuggling and looting of Syrian oil going back to at least 2014, in his estimation. Trump, Assad said, "just announce[d] the truth" about US policy.

000000
Popular comments
Yankees won't be able to do so. Iran seems to be hatching something clear and decisive.

PranSa
12 November 2019, 14:22 GMT10
000000
God bless Mr Lavrov. He is the one person I have come to trust and respect over the years. Basically anyone that allies with the USA is in for a rude awakening. To me, the USA represents the wickedness in the world today. The question is who will stop the US from their blatant act of theft, corruption, manipulation and wars. Not even the Europeans can trust them and who will the US invade next, and when will they start to rob western countries of their wealth and power.
Rokenbok
12 November 2019, 14:40 GMT14
000000
Newsfeed
0
New firstOld first
loader
LIVE
Заголовок открываемого материала
Access to the chat has been blocked for violating the rules . You will be able to participate again through:∞. If you do not agree with the blocking, please use the feedback form
The discussion is closed. You can participate in the discussion within 24 hours after the publication of the article.
To participate in the discussion
log in or register
loader
Chats
Заголовок открываемого материала
Worldwide
InternationalEnglishEnglishMundoEspañolSpanish
Europe
DeutschlandDeutschGermanFranceFrançaisFrenchΕλλάδαΕλληνικάGreekItaliaItalianoItalianČeská republikaČeštinaCzechPolskaPolskiPolishСрбиjаСрпскиSerbianLatvijaLatviešuLatvianLietuvaLietuviųLithuanianMoldovaMoldoveneascăMoldavianБеларусьБеларускiBelarusian
Transcaucasia
ԱրմենիաՀայերենArmenianАҧсныАҧсышәалаAbkhazХуссар ИрыстонИронауОssetianსაქართველოქართულიGeorgianAzərbaycanАzərbaycancaAzerbaijani
Middle East
Sputnik عربيArabicArabicTürkiyeTürkçeTurkishSputnik ایرانPersianPersianSputnik افغانستانDariDari
Central Asia
ҚазақстанҚазақ тіліKazakhКыргызстанКыргызчаKyrgyzOʻzbekistonЎзбекчаUzbekТоҷикистонТоҷикӣTajik
East & Southeast Asia
Việt NamTiếng ViệtVietnamese日本日本語Japanese中国中文Chinese
South America
BrasilPortuguêsPortuguese
NewsfeedBreaking
05:31 GMTCOVID-19 Live Updates: Malaysia Detects First Case of Omicron Variant
05:29 GMTISS to Perform Avoidance Maneuver Against Space Debris on Friday
05:23 GMT37 Years After Bhopal Gas Tragedy, New Series ‘The Railway Men’ to Pay Tribute to the Unsung Heroes
05:23 GMTAmerica's Epidemic: The US’s Massive Mass Shooting Problem
04:10 GMTUS Midterms 2022: Democrats Fear Congressional Shakeup as 19 House Dems Will Not Seek Reelection
04:04 GMT'I Knows It's Not Me': Alec Baldwin Says He's Not to Blame for Fatal 'Rust' Shooting
02:17 GMTThe Harris Shuffle
01:26 GMTUS Government Actions Urgently Needed to Better Protect Critical Infrastructure - Report
00:52 GMTIranian Scientists Recruited by Israel’s Mossad Behind Explosions at Natanz Nuclear Plant - Report
YesterdayUS, EU Diplomats Emphasize Need to Cooperate With China Where Possible - Joint Statement
YesterdayUS Signs $415Mln Deals With 3 Companies to Design Commercial Space Stations - NASA
YesterdayBiden Admin Finalizes Plan to Reinstate Trump-Era 'Remain in Mexico' Policy at Southern Border
YesterdayManchester United's Michael Carrick Steps Down as First Team Coach
YesterdayUS Congress Passes Spending Bill to Stave Off Government Shutdown, Measure Heads to Biden
YesterdayWall Street Rebounds as Heat Fades on Omicron, Dow Jones Up Almost 2%
YesterdayFTC Sues to Block $40 Billon Merger of US Chipmaker Nvidia With UK’s Arm Ltd
YesterdayCristiano Ronaldo Scores 800th Goal for Club and Country
YesterdayGunman at UN Headquarters Not Terrorist Threat, Came to Deliver Documents - Police
YesterdayRussian Prosecutors Launch Probe Into Whelan's Complaints of Prison Corruption - Brother
YesterdayNewly Disclosed Docs Reveal DoJ Investigating Andrew Cuomo Over Sexual Harassment Claims