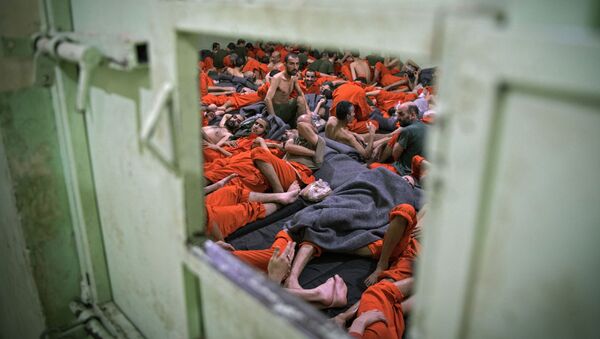 Oleg Burunov
All materialsWrite to the author
The statement comes a week after Turkish Interior Minister Suleyman Soylu said that Ankara will send the Daesh* prisoners it has captured back to their home countries.

Turkish President Recep Tayyip Erdogan has stated that Ankara would go ahead with deportation of Daesh terrorists regardless of whether home countries will accept them.

“Who stayed on the border there, which country did receive their [Daesh] militants and which one did fail to do so - we don’t care. We will continue to deport them”, Erdogan told reporters in Ankara on Tuesday.

The statement comes after Turkish Interior Minister Suleyman Soylu pledged earlier this month that Ankara would send Daesh militants it has seized back to their home countries.

He also said that Ankara won't tolerate Europe's inaction on the issue of Daesh prisoners when Turkey is left alone to deal with them.

Turkey captured some escaped Daesh prisoners in northeastern Syria during its Operation Peace Spring which started on 9 October and was suspended after a ceasefire was clinched on 17 Ocdtober. Ankara said the operation was essential to oust Kurdish militants and Daesh fighters from the border area and establish a security zone for Syrian refugees there.

Erdogan, for his part, said that Turkey has thus far deported a total of 7,500 Daesh terrorists, with 1,149 militants still in Turkish prisons.

More Than 100 Daesh Prisoners Now at Large, US Envoy Claims

Late last month, James Jeffrey, the US special representative for Syria engagement and global head of the coalition to defeat Daesh, stated that about 100 Daesh prisoners have escaped detention since the beginning of Turkey’s military operation in Syria’s northeast earlier this month.

“We would say that the number is now over 100. We do not know where they are”, Jeffrey told Congress on Wednesday.

He described Daesh detainees as those who are “among the most dangerous fighters, intent on attacking the United States and its allies,” and questioned whether the US is able “to monitor or effectively operate against ISIS, given the withdrawal of US forces [from Syria]”.