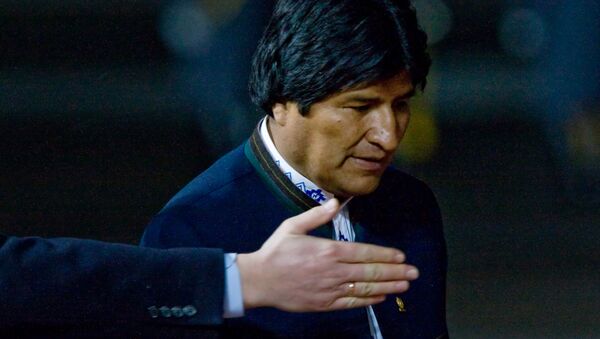 The ousted Bolivian president said that Mexico essentially saved his life, revealing that both his and his sisters' houses in Bolivia got ransacked.

Evo Morales, the now-ousted President of Bolivia, has reached Mexico where he was granted political asylum, with Mexican Foreign Minister Marcelo Ebrard welcoming him upon arrival.

The former Bolivian head of state reached Mexico aboard a Mexican Air Force airplane which flew him from the town of Chimore where he initially retreated after his ouster.

​Commenting on the current situation, Morales said that Mexico saved his life by providing him refuge, claiming that he was a target of an assassination plot and revealing that both his and his sisters' houses in Bolivia got ransacked.

Morales also mentioned that he has no intent to abandon politics.

Meanwhile, Bolivian indigenous people who support Morales staged a rally in the country's capital of La Paz, in front of the National Congress at Plaza Murillo.

​On 10 November, Bolivian President Evo Morales resigned after the national armed forces sided with demonstrators who opposed his serving a fourth term. The protests erupted after international observers found "grave irregularities" in the 20 October election.

Shortly afterwards, Morales fled the country for Mexico, where he was granted political asylum, due to apparent concerns for his safety.

His flight was fraught with complications as the plane he was traveling aboard was denied permission to fuel in Peru, making a stop in Paraguay instead.

Mexico's foreign minister also refused to reveal the names of any Bolivian officials and lawmakers who may have requested asylum, citing the threat they could face.