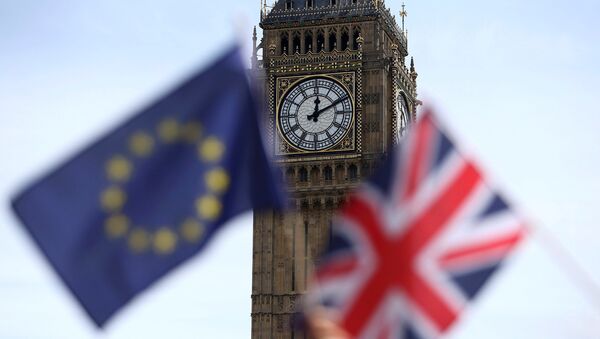 © REUTERS / Neil Hall
Subscribe
Associate Professor and University Teaching Fellow in the department of politics at DeMontfort University Alistair Jones explained if any pro-remain parties have chance of gaining ground at the next general election.

Sputnik: Would the UK be able to regain its former standing within the EU if Brexit was cancelled?

Alistair Jones: Britain can unilaterally revoke Article Fifty at any time, this decision was taken quite a while back so from that perspective we could just cancel Brexit and there would be nothing that the EU could do about it.

The consequence of doing that though, would be that our position in the EU will have been hugely undermined because of the actions of the last three years, the vote, the negotiations, the re-negotiations, the extensions and everything else, we have upset all of our European partners.

If we were to return; I suspect that our standing would be at the bottom of the heap in this respect, in that if we wanted to do to change the EU and help it develop, we would have to work phenomenally hard to persuade the other members to doing something like that, so it’ll take a long time if Britain was to revoke Article Fifty, for us to get back to the standing that we used to have as one of the senior players.

Alistair Jones: It is still an option. The default position is that the UK leaves the EU without a deal, that is always the starting point, and if we get into that situation of it being a choice between no deal or no Brexit; then parliament will have to decide.

If a Brexit-oriented parliament is in place; then we would leave without a deal. If it’s something similar to the status quo; then parliament may instruct the government to revoke Article Fifty, so it is not implausible.

Alternatively, if Corbyn leads a government or coalition government; having outlined that he would hold a second referendum on the matter, then there is a chance that Britain could vote to remain in the EU, so in that respect the UK not leaving is still a viable option.

Sputnik: How would the British public react if Brexit was cancelled?

Alistair Jones: There would be some people who would be very pleased about it. Ever since we held the referendum, the 48% who voted remain have been largely ignored, but if we revoked Article Fifty and didn’t leave the EU, the 52% who voted for Brexit will argue that they are now being ignored, and they will be up in arms.

I suspect that while I hope we wouldn’t see violence in the streets, there is a possibility that there could be some stoking up of that in some parts of the country, and that we could have problems, but I think we will have huge problems in the country as a whole if we were not to leave the EU, because people will be so angry, confidence in politics as a whole has already been hammered very badly over the past three years, and it will make the situation even worse.

Future politicians will have to work phenomenally hard just to regain their ground and any modicum of trust they might have had, to enable them to actually do their jobs properly, and the reality is that the whole situation in politics right now has become so toxic, the number of death threats that politicians have received, in particular since the vote for Brexit, has been really scary, and the fact that some of our leaders such as Boris Johnson, have not taken these threats seriously is very bad indeed.