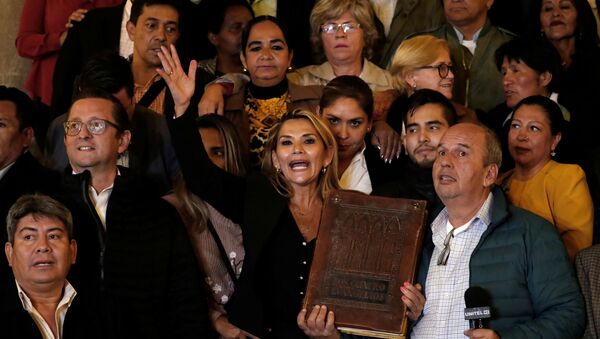 Bolivia’s Second Vice Speaker of the Senate Jeanine Añez announced Tuesday that she will serve as interim president in light of the recent resignation of ousted President Evo Morales.

"According to the text and meaning of the Constitution, as president of the Senate, I immediately assume the Presidency of the State envisaged by the constitutional order and I promise to take all the necessary measures to bring peace to the country," she said on November 12.

#URGENT Jeanine Añez @JeanineAnez assumes presidency of #Bolivia as indicated by the constitution. She is the second female president in our history. She swears to pacify the country and lead us to new elections. I am in tears. #BoliviaLibre #BoliviaProtests 🇧🇴 pic.twitter.com/msY3keq5nI

Añez's assumption of the presidency comes unilaterally, shortly after Bolivian lawmakers revealed they lacked quorum to formally approve Morales' resignation due to an inadequate showing from members of the Movemiento al Socialismo (MAS). Despite her declaration, a lack of a formal vote violates the Bolivian Constitution.

The lawmaker's new position follows the expedient resignations of Vice President Álvaro García Linera, Minister of Defense Javier Savaleta, the heads of both chambers of Congress and the head of the electoral commission - all of whom belong to Morales' MAS party.

Earlier this week, dozens of staffers with the regional election commission were arrested in relation to an ongoing investigation concerning the results of the October 20 election.

ALERT: President Evo & VP are safe but the lives of lawmakers and social leaders of the MAS, still in Bolivia, are in immediate danger. Assembly members are in danger of death. Camacho has threatened them and will not allow for any kind of 'peaceful transition' from the coup.

Morales, who has fled the country for political asylum in Mexico, has said the recent series of events is part of a coup led by right-wing opposition leaders Carlos Mesa and Luis Fernando Camacho.

The ousted leader later denounced Añez's self-declared presidency as a blatant disregard for and violation of the Bolivian Constitution.

"The most artful and disastrous blow in history has been consummated. A coupist right-wing senator calls herself president of the senate and then interim president of Bolivia without a legislative quorum, surrounded by a group of accomplices and led by the armed forces and the police that repress the people," Morales said in a translated social media post.