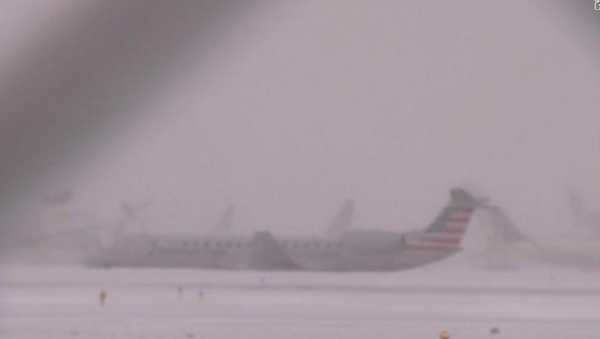 Video footage of an American Airlines plane sliding off the runway Monday while landing at Chicago O’Hare International Airport has gone viral as razor-sharp cold plagues the eastern two-thirds of the US.

The video, shot by a passenger on the plane, shows the plane skidding off the runway and its right wing being dragged against the snow-covered ground. After the plane stops, a woman can be heard saying, “I think we landed!” The plane was traveling from Greensboro, North Carolina. When the accident occured, there were wind gusts at about 30 mph and low visibility, according to reports.

​"In a statement, American Airlines spokesperson Sarah Jantz confirmed that no passengers were injured during the accident.

"After landing, American Eagle flight 4125, operated by Envoy Air, slid off the runway due to icy conditions at Chicago O’Hare. No injuries were reported. All 38 passengers and three crew members were deplaned from the aircraft and are now safely back in the terminal,” Jantz said, USA Today reported.

According to FlightAware, more than 380 flights out of Chicago O’Hare Airport were cancelled Monday due to inclement weather conditions including snow and ice.

​Chicago is not the only city facing hazardous winter weather.

An Arctic blast has hit many states from the Gulf Coast to the Great Lakes, and winter weather warnings or advisories have been issued from the Midwest to New England. On Monday morning, snow accumulated in Detroit, Kansas City, Chicago and Milwaukee.

​“The coldest surge of arctic air so far this season will bring widespread record low temperatures for much of the central and eastern US even down to the Gulf Coast. Accumulating snow is expected to impact areas from the Great Lakes to northern New England,” the US National Weather Service (NWS) warned Monday, also noting that the freezing temperatures, which are forecast all the way down to the central Texas coast, will “make it feel like in the middle of winter rather than in November for much or the eastern two-thirds of the country for the next few days.”