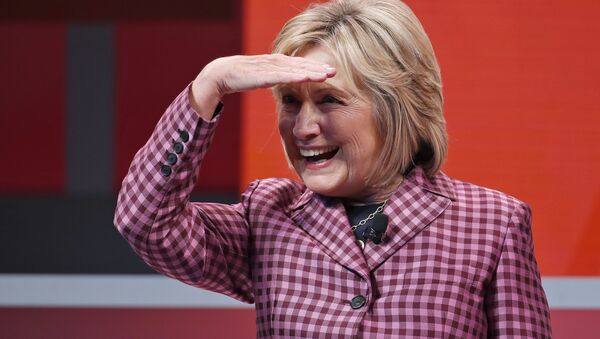 © AP Photo / Alex Brandon
Subscribe
Recent news that Michael Bloomberg has joined the US presidential race may cause Hillary Clinton to join the presidential race at the last moment, an ex-strategist for the former presidential candidate said. It will depend on her assessment of the political field following Bloomberg’s inclusion, he asserted.

Hillary Clinton still has “a couple of days” to join the presidential race, and it is unclear whether Michael Bloomberg’s inclusion will influence any decision she is thought to have made, says Mark Penn, Clinton’s former strategist, in an interview with Fox New's Sunday Morning Futures.

"There’s still a couple of days here," Penn observed. “I don’t know whether [Clinton will] look at the Michael Bloomberg thing and say, 'the field's too crowded now. I missed my opportunity,' or the opposite.”

Attempting to imagine Clinton’s train of thought, Penn opined that she could actually decide to jump in.

"'Wow the field's weak, I could come in. I could get 165,000 donors, I’m tied with [Joe] Biden in some of these early states...,'” Penn said, imagining his version of Clinton’s thought process, suggesting that he believes that “there's still a political logic there for her."

Commenting on the “weak” part, Penn asserted that Biden, viewed by some as the Democratic frontrunner of the moment, is “weak” but the best the Dems have, as other candidates have, in his estimation, drifted too far to the left to beat Trump. He speculated that Michael Bloomberg had a similar opinion and decided it was his opportunity.

"I think Michael Bloomberg saw that opportunity and made a pretty intelligent decision," Penn said. "For him, it’s now or never in terms of running for president, so why not get in and shake up the Democratic Party."

According to Penn, Bloomberg has two obstacles to overcome. The first is Biden’s performance in the early states of Iowa and New Hampshire.

"If Biden doesn’t come through [Iowa and New Hampshire] [...] that's going to present a clear field for Bloomberg,” Penn argued. “If Biden does particularly well in those two states, that might block the Bloomberg effort. So a lot of pressure is put on the Biden campaign now to deliver in the early states."

The second obstacle is the legal requirements for small donors put forth by the Democratic Party.

On Friday, Michael Bloomberg announced he would run for the Oval Office, prompting sarcastic remarks from Trump, who said there’s nobody he’d rather run against than “little Michael.”

For her part, Hillary Clinton has consistently stated that she will not run for president in the 2020 US elections.