Hand Grenade & Pin: Why Clinton, the Bidens' Cases May Blow Back All Over the Dem Establishment 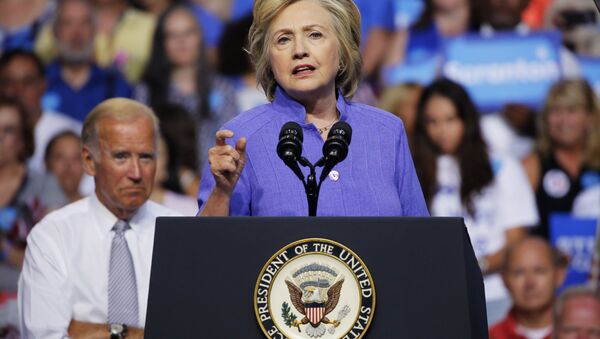 Ekaterina Blinova
All materialsWrite to the author
The Republicans' decision to step up scrutiny towards Hillary Clinton, the Bidens and their associates in the Obama administration is a step in the right direction, believes Wall Street analyst Charles Ortel, adding that it could shed light on why then President Obama turned a blind eye to potentially criminal behaviour among prominent politicians.

While the House Democrats are pushing ahead with the Trump impeachment process, the Republicans have targeted former Secretary of State Hillary Clinton and current presidential candidate and ex-Vice President Joe Biden.

On 4 November, Republican Senator Chuck Grassley, chairman of the Senate Finance Committee, sent a letter to Secretary of State Pompeo asking him to specify how State Department officials under Barack Obama were sanctioned for security violations related to Hillary Clinton's private email server and to provide the names and titles of these officials.

​Earlier, on 16 October, the US State Department informed Grassley that it had completed its investigation into the mishandling of classified information that passed through Clinton’s unauthorised email server and revealed that "38 employees were found culpable for 91 separate violations of security protocols" at the same time uncovering an additional 497 violations.

On 6 November, Grassley and Ron Johnson (R-Wis.), chairman of the Senate Homeland Security and Governmental Affairs Committee, asked the White House to look into potential conflicts of interest related to Hunter Biden's role in Ukraine gas company Burisma Holdings while his father, Joe Biden was serving as the vice president, with responsibility for overseeing Ukrainian affairs, under then President Barack Obama.

​Citing newly obtained State Department's emails, the senators requested information regarding the way a consulting firm hired by Burisma may have used Hunter Biden's role on Burisma’s board of directors to possibly influence State Department matters.

Wall Street analyst and investigative journalist Charles Ortel has commented on the Republicans' "counter-strike" against Hillary Clinton, the Bidens and their associates.

Sputnik: What's behind this double-punch against the Democratic camp, in your opinion?

Charles Ortel: Republicans in the US Senate, finally, are asserting themselves properly in their oversight roles of the Executive branch. For years, dynastic political families in both parties seemingly have abused statutes and regulations barring them from amassing wealth and more political power through actions taken or not taken in their government service.

Here, the biggest unanswered set of questions surrounds who authorised and allowed the arrangements that Clinton and her aides used from 21 January 2009 through 1 February 2013, and who allowed these people to retain US government property until a portion of it was returned to the Department of State in December 2014?

If President Trump wants to satisfy his base and win re-election in 2020, he must demonstrate, using these two cases and more that accepting high political offices is not a sure path towards self-enrichment, and that favor with our government cannot be purchased with sweetheart financial arrangements. In short, President Trump must take down the for sale signs put up by cronies and politicians in both political parties.

Sputnik: Do you think the Republican Party will double down on investigating both Clinton and Biden amid the House Democrats' impeachment process against Donald Trump? What's your take on former White House Steve Bannon's remark in a 3 November interview with Fox News that "Joe Biden is a hand grenade and Hunter Biden's the pin and when that pin gets pulled that shrapnel is going to blow back all over the Democratic establishment"? Do you think that the Clinton emailgate case may have the similar effect on the Democratic camp?

Charles Ortel: I certainly hope so – the US Justice Department and Internal Revenue Service (IRS) have had ample time to consider both matters, including the degree to which each set of actors may have monetised their political connections.

In the Biden case, it would appear that Hunter Biden scored highly questionable payments well above market rates for schemes seeking profit in areas where having access to the Vice President of the United States and the Obama Administration offered competitive edges.

In the Clinton case, also awful, it appears that payments may have been routed to the family directly (speeches) and indirectly through myriad “charities” named after or linked to the Clintons.

Both cases are appalling and must be challenged. To me, the Clinton case seems most egregious because individuals (and elected officials) are barred from using tax-exempt organizations for personal and political gain. Just this past Thursday, a New York judge assessed an additional $2 million penalty against the Trump Foundation for using a charity for political and personal purposes.

Not as retribution, but to assure even-handed application of all laws, Justice and the IRS must investigate, and if warranted, prosecute the Biden and Clinton cases, and any related matters.