Ilya Tsukanov
All materialsWrite to the author
Le Mesurier created the controversial 'urban search and rescue' organisation in 2013. The White Helmets have been repeatedly accused of staging fake attacks in the conflict in Syria in a bid to prompt a Western-backed military intervention in the war-torn country.

A law enforcement source has confirmed the death of James Le Mesurier at his home in Istanbul. However, the source added that at this time, it remains "unclear whether he was murdered, or committed suicide."

The White Helmets' official Twitter account has confirmed Le Mesurier's passing, saying the group was 'shocked and saddened' by the news and expressing its "deepest condolences to the James family." The group commended the former intelligence agent's "humanitarian efforts which Syrians will always remember."

The Syrian Civil Defense family extends its deepest condolences to the James family, and we express our deepest sorrow and solidarity with his family. As we also must commend his humanitarian efforts which Syrians will always remember. pic.twitter.com/t8IvpIhyFV

Earlier, an anonymous diplomat was quoted by Reuters as saying that Le Mesurier's body had been found early Monday morning at his home in the city's Beyoglu district.

Sözcü, a major Turkish daily newspaper, reported, citing police sources, that Le Mesurier may have killed himself, and that he had been taking anti-depressant medication for some time ahead of Monday's incident.

Sabah, another major Turkish paper, also reported, citing law enforcement, that police consider suicide the most likely cause of Le Mesurier's death, with the former spy possibly jumping to his death from the balcony of his 3rd floor apartment. No traces of gunshot or knife wounds were found his body, police told Sabah.

A source close to the investigation later said that there was no evidence of any unauthorised persons being near his residence at the time of his death.

Le Mesurier's wife was quoted by Sabah as saying that she and her husband had dinner together on Sunday. "After that we took sleeping pills and went to bed. A few hours later I woke up from the ringing of our doorbell. It was the police. They told me that my husband had fallen from the balcony and died."

Police are continuing their investigation.

Le Mesurier, a British private security specialist and former UK military intelligence officer, founded the White Helmets in Turkey in March 2013. Before that, he served as an intelligence officer in other theatres of conflict, including a stint in Pristina, Kosovo soon after the NATO intervention in 1999. In the 2000s, he went on to serve as vice president of special projects at the Olive Group, a private mercenary organisation which later merged with Blackwater-Academi into Constellis Holdings.

In a 2014 interview, Le Mesurier said that he spontaneously raised about $300,000 in initial funding from the UK, the US and other countries and trained 25 vetted operatives to create the White Helmets after witnessing the suffering in Syria, with the group soon accumulating over $150 million in cash after Western NGOs, Gulf countries, several European countries and Japan sent money and supplies to help the group. The group continues to enjoy widespread publicity and support in Western countries, and is a UK-registered non-governmental organisation.

Syria considers the White Helmets a "terrorist organisation," citing the group's regular operations in areas controlled by jihadist militants, including al-Qaeda offshoot the Nusra Front,* as well as its creation of video fakes which seem designed to prompt Western military intervention in Syria. Independent journalists have repeatedly accused the group of serving as 'al-Nusra's propaganda arm', given its alleged ties to the militants. 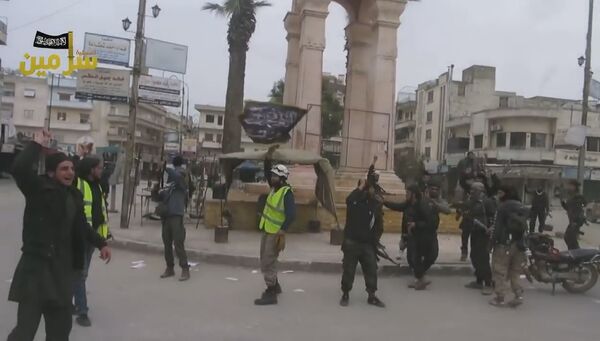 In April 2018, the US, UK and France launched a series of air and cruise missile strikes against Syria following the publication of a White Helmets video appearing to show that a horrific chemical attack that had taken place in Douma, a city in the Damascus suburbs about 10 km from the capital. The Douma attack was later debunked by verified testimony from multiple eyewitnesses who appeared in the video, including that of an 11-year-old boy who revealed that he and his mother had been given food to participate in the video. Since that time, Damascus and its allies have repeatedly voiced concerns about the possibility of more fake videos and false flag attacks by the groups designed to prompt Western intervention.

Last week, the Russian Foreign Ministry urged London to investigate Le Mesurier's possible ties to al-Qaeda. At a briefing on Friday, Foreign Ministry spokeswoman Maria Zakharova pointed to independent research indicating the former spy's possible links to terrorist organisations going back to his work in Kosovo. "There is data suggesting that there were al-Qaeda members among his team there," Zakharova said, adding that Moscow would "very much like to hear what London has to say about these facts."

Earlier this year, Britain's Home Office announced that some 100 volunteers and family members from the White Helmets had been resettled in the UK after being evacuated from Syria last year with the help of British government officials.

*A terrorist group banned in Russia and other countries.