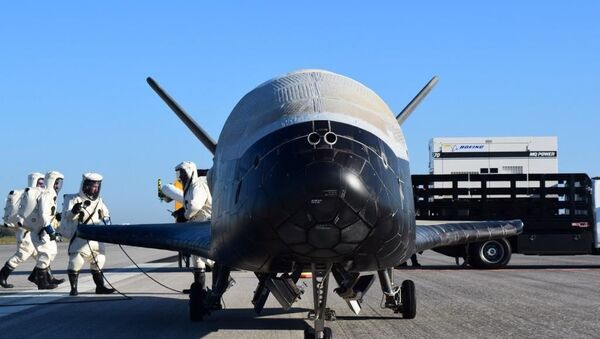 In an effort to improve combat effectiveness, the US Air Force may embark on a new mission that would allow its F-35 Joint Strike Fighter and F-22 Raptor aircraft to share information with the top-secret X-37B space plane.

Air Force Chief of Staff Gen. David Goldfein announced last week to attendees of the Air Force Association breakfast series that the service’s efforts to improve the transmission of information between service members and platforms may one day transcend the Earth’s bounds.

Brig. Gen. David Kumashiro, the Air Force’s director of joint force integration and deputy chief of staff for strategy, integration and requirements, expanded on the chief of staff’s comments at a DefenseOne Outlook event and noted that data transmitted via such a connection would more than likely be used to enhance the Air Force’s combat efforts and situational awareness. He also revealed which aircraft are up for initial consideration.

“When you look at something like an X-37 or an F-35 or F-22 … as we refine these connections and we show that level of interoperability that is resilient, redundant and reliable, we will then be able to develop what that means in terms of creating an effect against the adversary," he said Thursday, reported Military.com.

Though the X-37 program has been around since 1999, NASA handed it over to the Pentagon’s Defense Advanced Research Projects Agency (DARPA) in 2004. Not long after the X-37A space plane completed its first captive carry flight in 2005, DARPA then transferred the project to the Air Force, which began developing the X-37B, which is the latest known variant to date.

Though a lot of information pertaining to the X-37B spacecraft is classified, it completed its fifth Orbital Test Vehicle mission on October 27 after spending a record 780 days in orbit.

Following its most recent landing, the space plane’s program has spent 2,865 days in orbit, according to the Air Force.

Preston Dunlap, the Air Force’s chief architect, further explained to attendees of the DefenseOne event that communication between the X-37B and other stealth aircraft would allow the service to see “a picture for space and air and land surface and cyber.”

"You can see a picture, you can click on the ship, see where it's been, where it's traveling, what's on the ship ... and we need to be able to get that to our warfighters in a way that's accessible,” he added.

As the Air Force looks to incorporate space communication into its modernization efforts, China has made its own strides in developing a space plane and recently announced its spacecraft had successfully completed a wind tunnel experiment.

It’s not known whether the Air Force’s data-sharing concept will include the US Space Force - a space warfare branch proposed under the Trump administration that is separate from the US Air Force Space Command and US Space Command.