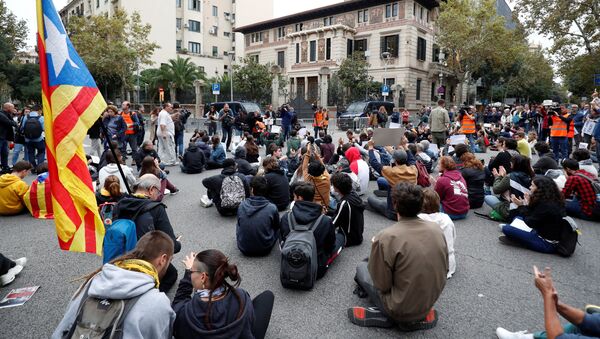 MADRID (Sputnik) - Catalan pro-independence group Democratic Tsunami announced on Monday that the protesters would continue blocking traffic on a motorway linking Spain and France for three days in a fresh act of 'peaceful disobedience' over jail terms to the region’s independence leaders.

On Monday morning, the next day after Spain’s general election, hundreds of radical protesters blocked the AP7 motorway in La Jonquera municipality, Girona province. As a result, a large number of trucks have queued near the border, with traffic jams also registered on bypasses.

The activists have erected a stage, where a concert was held in the morning. They have also delivered food in the border area. Neither French nor Spanish police have intervened in the situation, although reinforcements have been sent to the region.

"Today is the first of three days when this protest can be expanded and strengthened", Democratic Tsunami said in a statement.

According to the group, they seek to make the international community "convince Spain that the only way out is to sit down at the negotiating table to talk about self-determination" and release Catalan independence leaders sent to prison for their role in the unsanctioned independence referendum of 2017.

The highway blockade, the group says, is an act of 'peaceful civilian disobedience'.

Democratic Tsunami pledged last week to start three-day protests after Sunday’s election regardless of its results.

The violent protests have been ongoing in Spain’s secessionist region since 14 October. They were sparked by the Spanish Supreme Court's ruling to sentence nine Catalan independence leaders to lengthy prison terms. Hundreds of people have been arrested and injured in the unrest, including police officers.