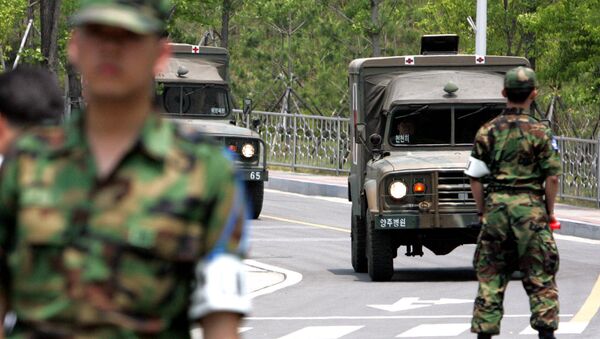 © AP Photo / Ahn Young-joon
Subscribe
Security experts say South Korea may not be interested in paying for US military assistance, and note that losing Seoul might mean more trouble for Washington than its Asian ally.

Prior to his 2016 election, Trump said that the US should stop protecting Japan and South Korea, or those countries should instead pay Washington for protection, calling South Korea a “money machine,” which pays the US “peanuts” in exchange.

"Japan is better if it protects itself against this maniac of North Korea,” he said in an interview with CNN at the time. "We are better off frankly if South Korea is going to start protecting itself ... they have to protect themselves or they have to pay us."

On Thursday, South Korea’s newspaper, Chosun Ilbo, reported that Trump wants Seoul to pay a whopping $4.7 billion to continue the US military presence in the nation, an enormous increase over current $870 million it pays annually.

Dr. Gal Luft, co-director of the US-based Institute for the Analysis of Global Security (IAGS), says Trump’s jaw-dropping demand might be in part motivated by his 2020 reelection campaign, as he needs some proof that he has delivered on his 2016 promises to end the “free ride” of US allies at the expense of US taxpayers.

“As US fiscal deficit approaches a trillion dollars, Trump is constantly reminded of the need to cut unnecessary spending and to demand allies to increase their contributions,” Luft said. “He will want to report to his voters that, unlike previous presidents who provided the world free services, he is standing up for the interests of the American taxpayer.”

Luft notes that the outcome of negotiations with South Korea will set the tone for further talks with other US allies, including NATO, Japan and Saudi Arabia.

The upcoming 2020 US presidential election might make North Korea’s Kim Jong Un nervous if he feels his “lottery card,” Donald Trump himself, may not remain in the Oval Office, Luft warns, adding that the DPRK leader may try to raise tensions to motivate Trump to again engage in negotiation.

Professor Kevin Gray, an analyst in international relations and an East Asia expert at the University of Sussex, says Trump wants to give the impression that it is South Korea who needs the US troops and not the other way around. In reality, however, the US needs troops on the peninsula as they are a part of The US regional strategy towards China. South Korea does not really need US assistance to defend itself against a conventional attack by North Korea, Gray notes.

“South Korea’s military budget is ten times greater than North Korea’s, and thus, the country is more than capable of defending itself against the North’s antiquated military,” says Gray. “As such, the notion that Seoul should shoulder the costs of the US military presence in South Korea seems rather out of touch with the considerable benefits that the US already derives from the arrangement.”

Gray speculates that US might be playing with fire making unreasonable demands, as chances are good that South Korea may refuse to pay, as it would win the current administration in Seoul domestic political points. Anti-US sentiment in South Korea has dwindled since the early 2000s, but Trump’s outrageous demands are likely to reignite public uproar.

“The popularity of the [President] Moon Jae-In government has taken a hit over the past few weeks due to domestic political scandals,” he said. “While it needs to maintain good relations with the US in order to pursue its broader goals of engagement with North Korea, it will not want to be seen as giving way to what most see as unreasonable demands by the US.”

The US strategy of outbalancing China depends on US military cooperation with both with South Korea and Japan, two nations who have unresolved issues rooted in the Japanese era of colonialism, Gray said. If the US-South Korea alliance deteriorates, Washington’s influence in the region will likely suffer wider negative implications, he added.