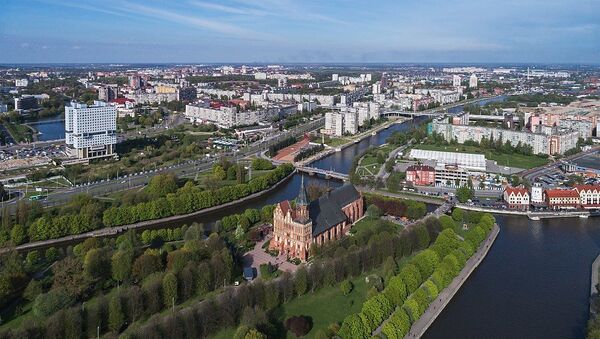 Oleg Burunov
All materialsWrite to the author
In September, the Russian Defence Ministry underscored that the Kaliningrad region, a Russian exclave located between Poland and Lithuania on the Baltic Sea, is fully protected "against any aggressive plans developed by US generals".

The Chinese website Eastday.com has cited the country’s Major General Du Wenlong, a leading People's Liberation Army (PLA) military strategist, as saying that in the event of a possible NATO-Russia conflict in the Baltic Sea region, the alliance would be able to seize the Russian exclave of Kaliningrad within two days.

According to Du, Kaliningrad is “not a big place”; it has an area of 15,000 square kilometres, and is located 1,000 kilometres away from Moscow, but “very close to the NATO countries”.

He suggested that Russia may quickly retaliate by launching strikes on several European capitals, in what Du warned may lead to a situation where "a large-scale operation will be triggered throughout Europe". Russian officials have not commented on the Chinese website's publication yet.

His comments come after Richard Hooker of the Jamestown Foundation, a US thinktank, claimed in a report that under a “hypothetical” scenario of a NATO armed conflict with Russia in the Baltic Sea region, the alliance should specifically focus on seizing the Russian enclave of Kaliningrad within at least two weeks.

“[…] It is imperative that 1) NATO forces overcome the Kaliningrad air-defence bastion within 14 days to bring the alliance’s airpower advantages into play; 2) in-place forces and rapidly arriving reinforcements hold out for 30 days; and 3) heavy reinforcements arrive in strength and enter the fight not later than 30 days after the commencement of hostilities. Today, NATO is not prepared to accomplish any of these objectives,” Hooker asserted.

At the same time, he did not elaborate on what could provoke the armed conflict, simply claiming that Moscow has plans pertaining to the Baltic region.

Anton Alikhanov, head of the Kaliningrad region, for his part, described Hooker's report as “tabloid fiction”, adding that “he was tired of commenting on American nonsense”.

Hooker’s claims followed the Russian Defence Ministry stressing in a statement in September that “the capabilities of the air defence in the Kaliningrad Region on detecting, escorting and, if needed, guaranteed neutralisation of any airborne targets in its coverage zone, are well known to all NATO pilots that have ever approached Russia's borders in the Baltics”.

The statement followed reports that the Pentagon is working on plans to potentially breach the region's air defence.

The plan and relevant training were reported by the outlet Breaking Defence which quoted Commander of the US Air Forces in Europe and Africa, Gen. Jeffrey Lee Harrigian as saying that “if that would ever come to fruition, we’d be ready to execute”.

Commenting on the matter, Kremlin spokesman Dmitry Peskov assured that all Russian regions are properly protected, while Russian Foreign Ministry spokeswoman Maria Zakharova said that Moscow sees the Pentagon's "irresponsible" statements on developing a plan to breach the air defences of the Russian exclave of Kaliningrad as a threat.