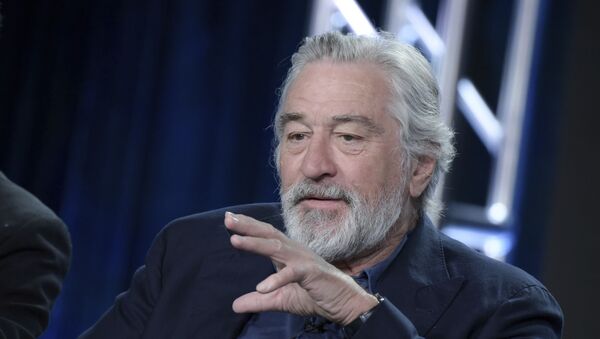 "If we don't go through this impeachment inquiry, we're letting him get away with something [...] He has done something wrong, he has to pay for that. He has to be held accountable", De Niro told MSNBC's Joy Reid on Saturday morning.

De Niro, who has repeatedly criticized Trump and his policies, also slammed the former reality TV producer and star as a "fake president".

"He calls everything else fake because he knows he's fake", the renowned actor said, adding that Trump had spoiled America's relations with many countries, noting that the US needs a president that can repair "the damage that has been done".

De Niro also hinted at his picks for the US president: Pete Buttigieg and Michael Bloomberg.

Former New York Mayor and high-profile billionaire Michael Bloomberg officially joined the 2020 Democratic presidential contest by meeting the registration deadline for the US state of Alabama primary on Friday.

Trump is polling significantly behind several Democratic rivals in head-to-head match-ups, among the 58 percent of voters who disapprove of the president, according to a recent poll released by The Washington Post and ABC News exactly one year before the 2020 presidential election.

The survey reveals a national shift in Trump approval, as during the summer, only former vice president Joe Biden had a clear lead over the president in the polls. The Washington Post suggested that the shift could be attributed to a greater number of independent voters swinging toward the Democratic vote.

Trump has been consistently embroiled in political scandal since taking office, most recently leading House Democrats to launch an impeachment inquiry in September. Trump is accused of misusing the powers of his office by asking Ukrainian President Volodymyr Zelensky to investigate political opponent Joe Biden.

Trump has denied the allegations, labeling the inquiry a political "witch hunt".

000000
Popular comments
"If we don't go through this impeachment inquiry, we're letting him get away with something [...] He has done something wrong, he has to pay for that. He has to be held accountable", .......... What wrongs has the 45th done? Can you, de Nero, kindly point out at least one? ....... And, are mere allegations to be treated at par with confirmed criminal acts, especially the allegations which are based on fallacies and hearsay?