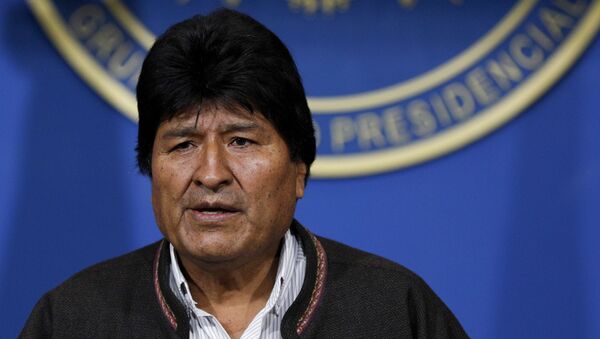 Bolivian President Evo Morales announced his resignation on Sunday after the nation's military and police urged the leader to step down amid ongoing violent protest across the Latin American country.

Morales, in his resignation speech, expressed hope that the turmoil and unrest across Bolivia would cease on Sunday evening.

​"My fight will continue, but I have an obligation to try to secure peace. It hurts that Bolivians are fighting with one another and it hurts that civil committees and leaders that have lost [in the election] are resorting to violence and confrontation among Bolivians. For this and many other reasons I am resigning and sending my letter of resignation to the Plurinational Legislative Assembly", Morales said.

"I have decided to resign as vice president as well as the president of the [Plurinational Legislative Assembly]", Linera told reporters, adding that he would present an official letter of resignation to the legislative assembly soon.

​​Earlier on Sunday, the commander of the Bolivian armed forces, Williams Kaliman, urged President Evo Morales to step down to "bring peace and stability for the benefit of Bolivia". These demands were echoed by the nation's police chief Vladimir Yuri Calderon, who also called on the president to leave his post.

Amid the ongoing political turmoil in the country prompted in part by opposition demands for a recount in the 20 October presidential election, unconfirmed reports circulated Sunday alleging that the former president's plane had requested a flight plan to Argentina.

Protests in the country sparked after Morales secured a new term in a hotly-contested presidential election. Peaceful rallies quickly morphed into unrest following a heavy-handed police response and incidents of arson and looting, including offices of the state-owned media, increased.