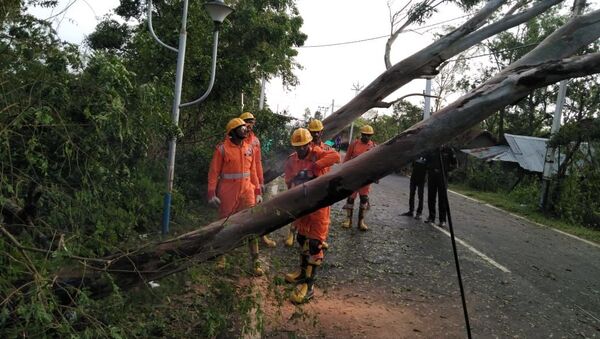 © National Disaster Response Force
Subscribe
New Delhi (Sputnik): Cyclone Bulbul barreled through the Indian state of West Bengal before gusting towards neighbouring Bangladesh. The cyclone has claimed at least seven lives in India and four in Bangladesh with nine injured.

Cyclone Bulbul made landfall in Bangladesh with winds of up to 50 miles per hour on Sunday.

The cyclone has now weakened from “very severe” to “severe “after hitting a depression in Bangladesh’s Bagerhat, Barishal and Patuakhali regions.

According to India’s Metrological Department, sea conditions will be rough and high over the North Bay of Bengal for the next six hours. Fishermen have been alerted to stay away from shore until the next warning.

Prime Minister Narendra Modi, who was in Dera Baba Nanak near Pakistan border yesterday for the inauguration of the Kartarpur corridor, also raised concern over the situation in a tweet on Sunday, saying that he has reviewed the situation of the cyclone and heavy rain in parts of Eastern India. He also spoke to West Bengal’s Chief Minister Mamata Banerjee regarding the situation and assured him of all possible assistance.

Reviewed the situation in the wake of cyclone conditions and heavy rain in parts of Eastern India.

Spoke to WB CM @MamataOfficial regarding the situation arising due to Cyclone Bulbul. Assured all possible assistance from the Centre. I pray for everyone’s safety and well-being.

One person died when a tree fell on him in Kolkata on Saturday. Another death was reported in Kendrapara in Odisha.

#CycloneBulbul | NDRF team carrying out relief and restoration work to bring back normalcy in Odisha. pic.twitter.com/2usS1v0drJ

Several areas of the East Medinipur district and the South 24 Parganas districts in  West Bengal were marooned by prolonged rains and gales as trees were uprooted, roofs flung out, houses damaged and livestock hurt. The power supply and internet connectivity was disrupted in many areas.

Cyclone BulBul has impacted large number of people who are in distressing situation. There is no electricity in the South 24 Parganas and East Midnapore districts, and the internet connectivity is very poor due to the low mobile network connection. pic.twitter.com/uiqlPwVhMb

According to the US-based AccuWeather Inc., Bulbul was equivalent of a category one or two hurricane in the Atlantic with winds about 130-140kph.

Odisha: Villagers at a temporary shelter home set up in Balasore district after their huts were damaged. #CycloneBulbul pic.twitter.com/c8MbjV4fUj

"There has been a lot of damage in villages. The cyclone damage is spread around 200 km. We have to conduct a survey for which we will fly drones. Lots of thatched houses have collapsed, agricultural land damaged," The Weather Channel quoted the Chief Minister of West Bengal Mamata Banerjee as saying.

Banerjee, who visited the control rooms at the state secretariat on Saturday to personally monitor the situation, said 1,64,315 people had been evacuated from low lying areas on the coast, according to ANI.

The government of the state has also opened 1,215 kitchens, and 112,365 people have been housed in relief camps.

Flights in and out of Kolkata were suspended for 12 hours, until 6 am today. Services of South Eastern Railways were also severely hit and several trains had to be cancelled after the railway tracks were submerged in water.

Around 75 passengers were rescued from a cruise ship in the Bay of Bengal on Saturday by the state police.

Military planes and ships have been deployed on standby to help in case of emergency.