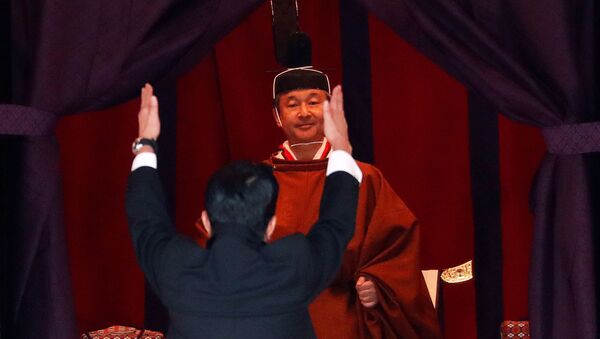 © REUTERS / ISSEI KATO
Subscribe
TOKYO (Sputnik) - The ceremonial parade involving the passage of the Japanese Emperor Naruhito and his wife Masako in an open car through the streets began in the capital of Japan, a Sputnik correspondent reported from the scene.

The parade was supposed to take place on the day of the announcement of the accession of the new emperor to the throne on October 22, but due to the tragic consequences of the typhoon Hagibis, which shortly before that claimed the lives of 95 people, it was decided to transfer him to this Sunday.

​An open car — a specially modified Toyota Century — rides 4.6 kilometers from the imperial palace to the residence of the new emperor in just 30 minutes. It is emphasized that this time a Japanese-made car will be used for the parade. Its price was about $740,000, more than triple the cost of a standard model. In the previous such ceremony, Rolls-Royce Corniche III was used.

​As early as 7 a.m., that is, 8 hours before the start of the procession, a special regime was introduced in the adjacent areas, and the passage of vehicles was prohibited. Four metro stations are temporarily closed for the entrance and exit of passengers.

​Last time, when the intronization of Naruhito's father, Emperor Akihito, was celebrated, 110,000 people came to greet the monarch on the streets of Tokyo. As expected, this time there will be even more people wishing to see the new emperor. It is forbidden to bring piercing and cutting objects, bottles, cans, sprays, flags on a long pole and extensions, large luggage to the places along the passage of the motorcade. The use of drones, selfie sticks and tripods is also strictly prohibited.

Naruhito became the new emperor on May 1 following his father's abdication due to advancing years. Back in May, he was handed over the traditional symbols of authority, including the sword Kusanagi-no-Tsurugi, the mirror Yata-no-Kagami, and the jewel Yasakani-no-Magatama.