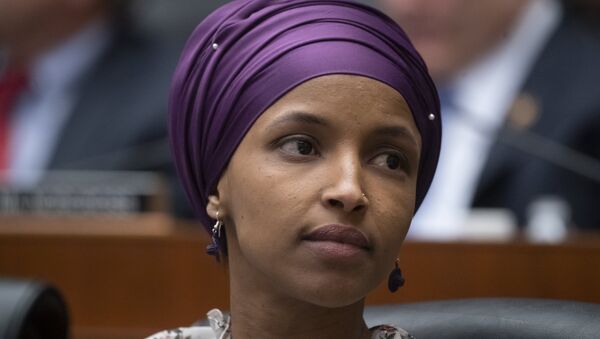 A progressive Congresswoman and staunch critic of Tel Aviv, Ilhan Omar is again the centre of controversy after suggesting that several US politicians hold pro-Israel positions because they receive cash political donations from the pro-Israel lobby.

Accusations of anti-Semitism have again been launched at Democratic Representative Ilhan Omar from Minnesota on Saturday, after she tweeted in response to a report that businessman Leon Cooperman had announced his support for former New York City Mayor Michael Bloomberg's 2020 presidential bid.

The freshman Democrat tweeted, "I wonder why?" on Saturday afternoon in response to the article, punctuating the question with a thinking emoji.

​Responses were quick, with Michael Dickson, executive director of an anti-racist group Stand with Us, tweeting:

“I suppose you think it’s all about the Benjamins. We get your insinuation. True to form”.

I suppose you think it’s all about the Benjamins? We get your insinuation. True to form. https://t.co/dynXq6HqXN

Political analyst and executive director  of the Israeli-Jewish Congress, Arsen Ostrovsky, tweeted: "Oh gee, please do enlighten us again, because you were in such 'fine form' before..." while reposting the previous "all about the Benjamins tweet", which previously received its own accusations of anti-Semitism.

Both anti-Omar responders made reference to a previous tweet in which Omar responded to Republican Kevin McCarthy who threatened to punish Omar for her opposition to the current regime in Israel by tweeting:

“It’s all about the Benjamins baby."

Omar was suggesting that McCarthy was threatening her due because he receives funding from the pro-Israel lobby, and that American Israel Public Affairs Committee (AIPAC) purchased support from American politicians in exchange for pro-Israel positions.

Omar previously tweeted in 2012 that Tel Aviv had "hypnotized" the world.

The allegations of anti-Semitism suggest that Omar, instead of directing class-based criticism against opponents, was insinuating that Jewish people in America hold financial sway over the US political system, a charge she has consistently denied.