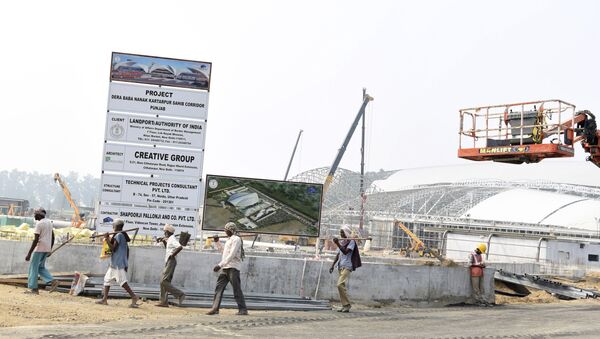 Earlier, Pakistan and India signed the historic Kartarpur Corridor agreement, which will allow Sikh pilgrims from India to receive visa-free access to the religion’s holy site in the Pakistani province of Punjab’s Narowal district.

"I would like to thank the Prime Minister of Pakistan, Imran Khan, for respecting the sentiments of India. I thank him for his cooperation," Modi said.

The Kartarpur Corridor is set to be opened on 9 November.

Indian Sikhs are ready to make a historic pilgrimage to Pakistan, crossing to one of their religion's holiest sites under a landmark deal between the two countries.

Pakistan's Prime Minister Imran Khan broke ground on the Kartarpur Corridor Project on 28 November 2018. Despite tense relations between the two nuclear-armed nations that has persisted since February, the religious project was completed within a year.

Located at 4.5 kilometres from the international border in Pakistan’s Narowal District, Gurdwara Darbar Sahib is the place where Guru Nanak, lived the final 18 years of his life, dying in 1539.

The Sikh community in India has long demanded access to the corridor in order to visit the Gurdwara Darbar Sahib Kartarpur holy site located in Pakistan about three miles from the border. The discussion on opening the route began in 1998, but numerous rounds of talks did not lead to any results.