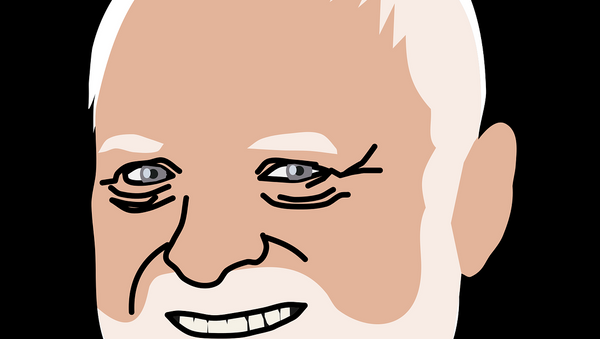 Speaking about the things he managed to accomplish with his photo-turned-meme, Andras Arato said that he’s proud of the fact that “something more has come out of the last 10 years than just an idiotic smile”.

A 74-year old Hungarian man named Andras Arato has stepped forward to tell a peculiar tale of his likeness turning into a meme known as “Hide the Pain Harold”, and of what he made of his newfound fame.

As Andras explained in an op-ed published by The Guardian, the pictures which essentially propelled him into the domain of memehood were taken during a photoshoot about a decade ago, back when he was still working as an electrical engineer.

About a year after that, Andras did a reverse image search on a photo of himself and was rather surprised by the result as he previously thought that “the pictures would just be used by businesses and websites.”

“I thought the pictures would just be used by businesses and websites, but I wasn’t expecting the memes”, he remarked. “People overlaid text on my pictures, talking about their wives leaving them, or saying their identity had been stolen and their bank account emptied. They used my image because it looked as if I was smiling through the pain.”

As the meme spread, journalists started contacting Andras in hopes of getting an interview, while some people even started to suspect that he isn’t a real person but merely a “Photoshop creation”.

Feeling annoyed that some Facebook pages were using his photo as their profile picture and pretending to be him, in 2017 Andras decided to set up his own page which he updated with videos and tales of his travels, and, in his own words, “that started everything going”.

“Now my life has changed dramatically. People ask me to talk about my story, to demonstrate the power of memes”, he wrote. “A football website flew me to England to make a video about Manchester City; I got to tour the ground and watch them play a Champions League game. The German mail-order giant Otto flew me out to make commercials for them. The Hungarian hard rock band Cloud 9+ have a song called Hide The Pain, with me in the video. I’m the face of Totum, the British discount card run by the National Union of Students – they got me to wear a bucket hat. I’ve even given a TED talk.”

Andras also pointed out that they’re actually trying to use his meme “for good” as well, with him becoming “the face of a campaign for a mental health service in Hungary.”

“I’m proud that something more has come out of the last 10 years than just an idiotic smile”, he surmised, adding that while he plays the role of “Hide the Pain Harold”, he’s not actually “a sad guy” but rather “a happy one”.