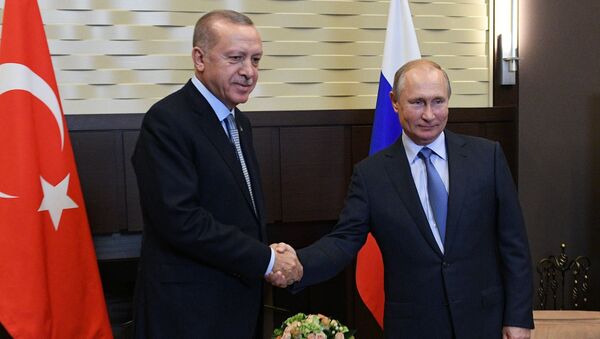 ANKARA (Sputnik) - Moscow and Ankara agreed in Sochi on 22 October that Russian military police and Syrian border guards would enter the northern areas of Syria to facilitate the withdrawal of Kurdish fighters from the YPG. Under the memorandum, Russia and Turkey also agreed to conduct joint patrols in the operation zone along the Turkish border.

"Our president has held phone talks with Vladimir Putin. They discussed the situation in Syria and reaffirmed their commitment to the 22 October Sochi memorandum," the statement said.

The sides also discussed bilateral relations and steps to boost trade between the two countries, according to the administration.

On 22 October, the two leaders signed a memorandum to settle the situation in northeastern Syria amid the Turkish offensive against Kurdish militia.

Under the agreement, Russian military police and Syrian border guards committed themselves to facilitating the withdrawal of Kurdish militia from an 18-mile border zone, outside the area of Operation Peace Spring. Russia and Turkey have since begun joint patrols along the border.