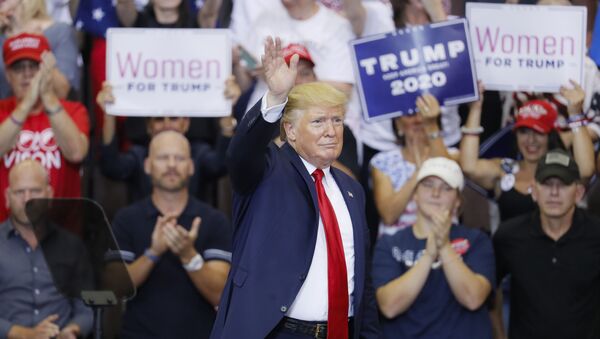 Oleg Burunov
All materialsWrite to the author
Back in February, Donald Trump’s physician Sean Conley concluded that the US President is in “very good health”, referring to the results of the relevant physical examination.

Next week, a group of US medics is due to testify during House impeachment proceedings against President Donald Trump that his mental health makes him dangerous and unfit for office, The Washington Examiner reports.

The magazine quoted Bandy Lee, a Yale School of Medicine psychiatrist, as saying that they think that “hearing about mental health aspects in the context of the impeachment hearings is critical, partly because, for the past tow and a half years we have been very deeply concerned about the mental instability of the president, and pretty much all that we have said has born out to be true.”

Apart from Lee, the group comprises there psychiatrists, a clinical neuropsychologist, a neurologist, and an internist.

Responding to criticism that issuing a mental health assessment without personal examination runs counter to some medical association codes, Lee and her colleagues said that they had just described Trump’s behaviour and signs of "mental instability and dangerousness," and that it should not be interpreted as issuing a diagnosis.

They pointed to the US President's public appearances, tweets, interviews, as well as former Special Counsel Robert Mueller's 448-page report, which they claimed allows them to determine that Trump “lacks mental capacity to fulfil the duties of his office”.

"There is very little that a personal examination will add," Lee said.

She was at the helm of a group of medical experts who conducted a mental health analysis of Trump earlier this year and then asked the US President to submit to a medical exam, but to no avail.

Shortly after, the medics concluded that Trump should not work as the US President given his current mental capacity, also recommending that “he lose his war powers and access to nuclear weapons,” according The Washington Examiner.

The medics’ decision on the testimony comes amid the ongoing impeachment inquiry against Trump which was announced by House Speaker Nancy Pelosi on 24 September.

It followed reports of a whistleblower complaint accusing the US President of abusing power in talks with Ukrainian counterpart Zelensky, during which POTUS tried to pressure Zelensky into starting an investigation into Democratic primary frontrunner Joe Biden.

Trump vehemently denies these claims, saying he had a "pitch perfect" talk with his Ukrainian counterpart and slamming the impeachment probe as another "witch hunt" and a “hoax”.

In a separate development earlier this year, Trump’s physician Sean Conley released details of the US President’s physical exam revealing that the commander in chief is indeed in "very good health overall."

“While the reports and recommendations are being finalized, I am happy to announce the President of the United States is in very good health and I anticipate he will remain so for the duration of his Presidency, and beyond," Conley pointed out.

Following his physical in 2018, she noted that POTUS had "incredibly good genes" and was in "excellent health."