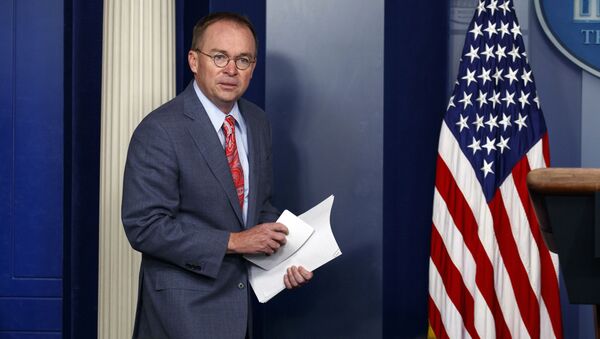 Mulvaney has reportedly declared he will refuse US House’s demands to testify, while the White House has issued a blanket order against cooperating with the Trump impeachment probe, according to Politico.

Mulvaney told a news conference on 17 October that Trump withheld aid, in part to get Kiev to initiate a probe against political rivals of the US president, a remark he later walked back, but that has now ratcheted up the Dems’ impeachment bid, the US-based media outlet said.

Earlier this week, US lawmakers, in a letter from three House of Representatives committees requested that acting the White House chief of staff appear for a deposition on Friday as part of the impeachment inquiry into President Donald Trump’s dealings with Ukraine. The letter also noted that White House lawyers would not be allowed to attend the deposition, according to House rules.

In September, House Democrats launched an impeachment inquiry into Trump over his 25 July telephone call with Ukraine's president, based on a complaint by a whistleblower who claimed that Trump misused his office in asking for an investigation into the Bidens.

The White House released what they claimed was a full transcript of the call and announced that there was nothing wrong with the conversation while claiming that Democrats are engaged in a political witch hunt that is intended to reverse the results of the 2016 presidential election.