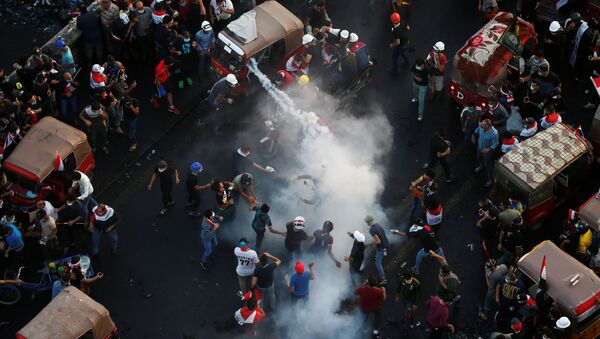 Iraq's top Shi'ite cleric, Grand Ayatollah Ali al-Sistani, has warned against the exploitation of the unrest by "internal and external" forces that seek to damage the country, Reuters reported.

He also stated that the security forces had to ensure that the demonstrations do not descend into more violence, going on to ask the government to respond to the protestors' demands as soon as possible.

"The biggest responsibility is on the security forces", a representative of Grand Ayatollah Ali al-Sistani said in a sermon after Friday prayers in the Shia Muslim holy city of Kerbala, according to Reuters.

Earlier in November, Iraqi Prime Minister Adel Abdul Mahdi assured in a televised address that he would carry out a cabinet reshuffle and introduce changes to election laws. At the same time, Mahdi noted that the government's resignation would throw the country into chaos. The authorities previously carried out a reshuffle in security bodies in provinces where protests had broken out.

Meanwhile, most Iraqi cities, primarily those in Shia-populated regions, are on general strike, with key roads blocked. Hundreds of people have been injured during the protests, while at least ten were killed on 6 and 7 November. The number of victims is approaching several thousand, according to reports.

Nationwide protests in Iraq began in early October and expanded in waves of escalation. People are demanding the ouster of the government, as well as economic reforms, better living conditions, social welfare, and an end to corruption. As the rallies have turned more violent, the government has had to declare a curfew and at one point cut Internet access in Baghdad and five other regions.