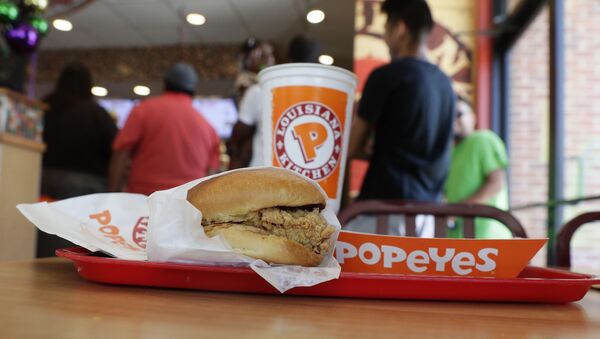 Popeye’s famous chicken sandwich was sold out months ago because the company underestimated its demand. This week Popeye's put it back on the menu and seems to have opened Pandora’s box, because this sandwich drives Americans crazy…

No, this huge line is not for Apple’s new tech wonder or some other gadget. No, Black Friday has not been rescheduled. People in the United States are standing in huge lines to get… Popeye’s famous chicken sandwich and cutting in line is deadly dangerous – literally.

​Videos posted online show mayhem near the company’s restaurants with people insulting and fighting each other. In one instance a woman damaged her Mercedes when she tried to grab a spot in a drive-thru line.

How to be prepared when ordering a Chicken Sandwich at your Local Popeye's.... pic.twitter.com/gCHSlbTjNI

​Other footage that appeared on the web showed a man viciously attacking another customer, knocking him down to the ground. And this week it was reported that a man was knifed in one of the chain's restaurants in a Washington DC suburb after an altercation broke out over the sandwich.

Restaurant employees have also fallen victim to the tasty treat. Numerous videos posted online show employees fighting each other at work or fighting with customers. But this is not all. A Tennessee man sued the restaurant chain for $5,000 over “wasted time” after he discovered that the sandwich was sold out. In another incident a mob of hungry people, one of them with a gun, tried to storm a restaurant in September after they were told that the sandwich was not available.

One wonders what the company is putting in the sandwich to make people so aggressive. Netizens have pondered if the secret ingredient is something illegal…

The man behind the Popeye's chicken sandwich pic.twitter.com/n5R1ZeBUZy

That sandwich is top with cocaine pic.twitter.com/rGrdIE3CnE