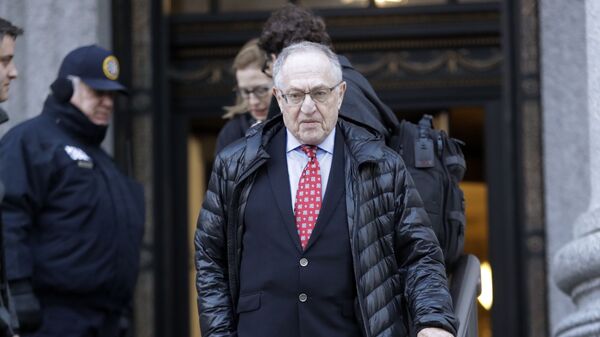 Attorney Alan Dershowitz has reportedly filed a counter-suit in response to Virginia Roberts Giuffre’s initial legal action against him for defamation, claiming that the alleged sex victim of deceased American paedophile Jeffrey Epstein is being "pressured" to "make money".

“Dershowitz never met Giuffre and never had sex with her [...] She then met her lawyers, who ‘pressured’ her to falsely accuse Dershowitz, suggesting to her that she could make money by doing so”, lawyers for the former Harvard Law professor write in new court papers filed Thursday in a Manhattan federal court, the NY Post reported Thursday.

Giuffre, now 35, has repeatedly accused the now-deceased sex trafficker Epstein of molesting her when she was 17. Moreover, Giuffre claimed publicly that the notorious paedophile allegedly forced her to sleep with some high-profile politicians and businessmen, including the UK's Prince Andrew - the third child of British monarch Queen Elizabeth II - when she was a minor, a claim denied by Buckingham Palace.

According to multiple reports, Giuffre alleges in her lawsuit that as a minor she was farmed out to various powerful men for sex, including Dershowitz.

The attorney claims in court documents that the accusations are part of a “broader conspiracy to subvert the judicial process for the purpose of making false claims against him in order to make a public example out of him, and extort private settlements from other, wealthier individuals associated with Epstein”, according to the media report.

"...Giuffre is a liar. She has told numerous provable lies about her age, who she has met, whether she had emails concerning Dershowitz, and other fabrications, in addition to her false accusations about sex with Dershowitz”, according to court documents seen by the NY Post.

According to the media report, Dershowitz is countersuing Giuffre for defamation and intentional infliction of emotional distress, and seeking unspecified monetary damages.

Jeffrey Epstein, the deceased sex offender, had been under investigation for nearly two decades at the time of his suspicious death. The convicted sex abuser was inexplicably taken off of suicide watch, despite reportedly trying to kill himself just weeks earlier. He was arrested in 2005 for molesting an underage girl. After being convicted of being a sex offender and paedophile, Epstein served a light sentence of just 13 months.

According to multiple US-based media reports, the influential American paedophile was linked to many powerful people, including US Presidents Bill Clinton and Donald Trump.