Did US Cut Deal With Nazi General to Get Hold of Advanced Rocket Tech? 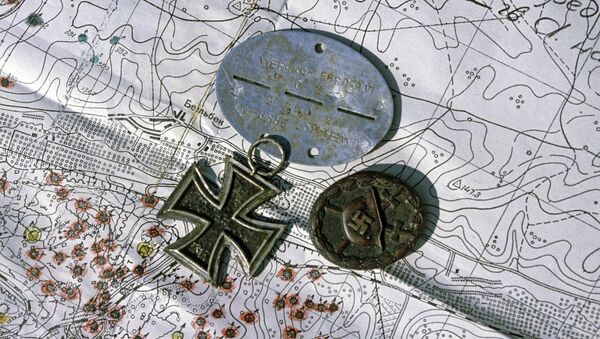 © Sputnik / А. Шадрин
/
Go to the photo bank
Subscribe
According to Dean Reuter, who co-wrote The Hidden Nazi: The Untold Story of America’s Deal with the Devil, the US managed to get “the worst Nazi war criminal you’ve never heard of” on their side in order to use his expertise to beat the Soviet Union in the subsequent arms race.

Director of the Practice Groups of the Federalist Society for Law and Public Policy Dean Reuter has stated that the US benefited from cooperation with General Hans Kammler, who supervised Germany’s rocket weapons programme. Did US officials strike an agreement with the Nazi general? The author of a book dedicated to this chapter of WWII history says he has evidence that there was an agreement to get hold of Nazi technology that eventually gave Washington the upper hand in its competition against the Soviet Union.

Reuter, who explored the Nazi general’s role in the Cold War, pointed out that it was known for some time in advance that Adolf Hitler’s Germany was going to lose, so “there was going to be this mad scramble for this technology”.

“There was lots of bounty to be found as the German Reich contracted and the Soviets approached from one side and the Western allies from the other, but this rocket technology was particularly attractive because it was so high-tech”, Reuter told Breitbart News Daily, discussing his work.

He explained that the country able to take in the most researchers from the Third Reich’s rocket team, which numbered some 4,500 scientists, “would rule the world”.

“We ended up on the moon first, and we ended up with the ICBM, and I think, winning the Cold War because we got [Nazi Germany’s] rocket team”, Reuter claimed.

Was There a Secret Agreement With the Nazi General?

The author insists that he possesses evidence that the US secured an agreement with the Nazi general, whom he described in his book as “the worst Nazi war criminal you’ve never heard of”, before the Second World War ended. He points to project Hermes, dating back to 1944, which was a contract between the US government and the industrial giant General Electric to build a V-2-type rocket. According to Reuter, emissaries of Hans Kammler met both American and General Electric officials at the US Embassy in Portugal. He claimed that Kammler “cut his deal with the Americans to turn over this technology” there.

The researcher points out that in order to avoid falling into the Soviets’ hands, as their troops were approaching northern Germany, where the rocket team was working, the general ordered that the scientists be moved to the central parts of the country. For this, a special underground facility was built by Nazi slaves, with tens of thousands of them dying in the process.

However, following the Yalta Conference, the site housing the rocket team fell within the Soviet zone of occupation. This prompted the general to sign another order to place the project in Bavaria, “literally within a week’s march of the advancing US Army”.

“So it’s clear to us that he made these movements — which were extraordinary [and] very difficult to do to — hand the rocket team over to the United States”, Reuter concluded.

000000
Popular comments
That's a bit of a rhetorical question and even though we're talking about the thoroughly immoral US, I don't suppose any nation in time of war would have had any such qualms in gaining an advantage over an adversary.