UK and US to Blame for Global Disconnect -Indian Analysts 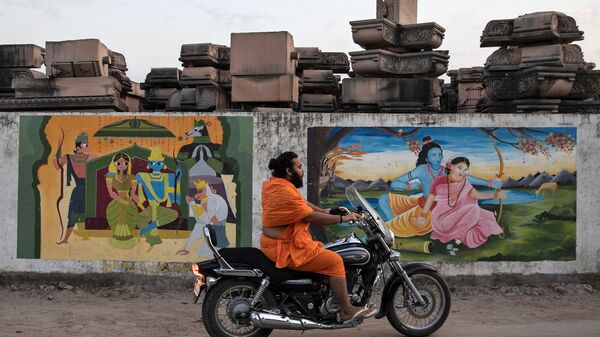 © REUTERS / DANISH SIDDIQUI
Subscribe
International
India
Africa
New Delhi (Sputnik): Competing for market space, sharing ideas, and policies are crucial keys to having an interconnected, mutually beneficial globalised society. But when countries suffer from identity crises and desire a bigger share of the pie than they are entitled to, it derails the process, Indian analysts have said.

Actively supporting a point of view that India should move forward with its cultural and soft power diplomacy, panellists participating in a discussion on the theme "India's Cultural Diplomacy: Celebrating Pluralism in a Globalised World" blamed nations like the US and UK for derailing the idea and spirit of globalisation.

According to veteran political leader Dr Karan Singh, of India's main opposition Congress Party, in the 20th century, the role of regional groupings such as SAARC (South Asian Association for Regional Cooperation) and ASEAN (Association of Southeast Asian Nations) was prominent, "but in the 21st century, we are seeing blowbacks and 'black swan' events (entirely unexpected events with momentous consequences)".

The election of Donald Trump as the 45th US president and Brexit (the scheduled withdrawal of the UK from the European Union) were two glaring "black swan" events that have had a momentous if not disastrous impact on the globalisation movement, Singh said on Wednesday during the panel discussion.

Elaborating further, Singh, a former Indian government minister and governor of the Jammu and Kashmir, said Trump has been pursuing an "anti-globalisation" and "I am an American nationalist" agenda since being inaugurated the US president in January 2017.

Singh stated that he (Trump) doesn't agree on climate change or global warming. "In fact, he has formally announced his intention to withdraw the US from the Paris climate agreement, making America the only country on Earth outside the accord which aims to reduce greenhouse gas emissions enough to keep temperatures from rising to dangerous levels".

"He (Trump) has made a habit of shattering time-tested bilateral agreements with many countries. We are living in an anti-globalised environment", he warned.

With the UK insisting on Brexit, he said, London has only weakened the European Union (EU), a political and economic union of 28 European member states. "Most countries today are not globally-oriented, and only the sharing of cultures can be the balm to repair these so-called blowbacks. Cross-cultural interaction is the medicine for an increasingly anti-globalised world".

Singh, a reputed author on Indian culture, also expressed his disappointment over the Narendra Modi-led Indian government closing down the Indological Studies and Sanskrit Departments in educational institutions abroad, describing the development as "one of the great tragedies of our time", and suggested that this could be because of a "lack of awareness".

Non-government organisations, on the other hand, were doing splendidly in promoting Indian cultural traditions, he said.

Stating that a country's soft power projection is part and parcel of its comprehensive political and socio-economic discourse, she said the "power of public opinion" is a source that should not be taken lightly.

While stating India's cultural diplomacy discourse continues to be unplanned and lacking in vision, Ambassador Sikri said: "We can't go with a one size fits all approach. We should have a coordinated and strategic approach to cultural diplomacy".

"We need to have an improved outreach towards the youth, the Indian Diaspora, and younger generations. Take Russia as an example. I hardly saw a university there that has India on its curriculum, yet students from there and other countries keep coming to India to learn", Ambassador Sikri, India's former High Commissioner to Bangladesh and Malaysia, said.

"The youth must be seen as your ambassadors, your window to the rest of the world. We must spread the idea of India through various methodologies", the ambassador added.

Shashi Tripathi, the former Indian High Commissioner to Canada, called for building bridges of connectivity, more aggressive monitoring, and assessment of Indian cultural programmes during the panel discussion. "Every country has its particular likes and dislikes, but it is important to celebrate pluralism in any form, cultural pluralism in particular".

K.P. Fabian, India's former Ambassador to Italy, emphasised that there is an urgent need to address the issue of soft power more effectively.

"That cultural ignorance is there is not a new thing. I am of the view that governments should coordinate, not spearhead such initiatives".

"We must stop signing so many (bilateral) agreements; we should first assess whether past agreements have been implemented", added Ambassador Fabian.