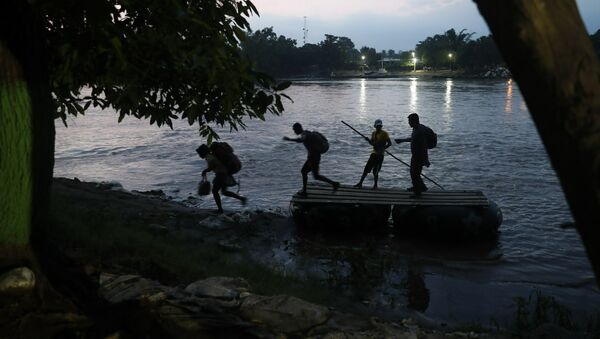 EL PASO (Sputnik) - Individuals dressed like the Mexican military attempted to help immigrants to illegally cross into the United States, according to US Customs and Border Protection (CBP) Special Operations Supervisor in El Paso Ramiro Cordero.

"Border Patrol Agents working near Socorro/San Elizario [Texas] observed subjects on the Mexican side of the border, some of these were wearing what appeared to be military uniforms and a military-style Humvee with a ladder", Cordero said of an incident that occurred late at night on 28 September.

"There was an attempted entry with the use of a ladder but no arrests in the area", the official added.

Cordero also said that the suspicious activity on the US-Mexico border was reported to Mexican authorities.

Another CBP official, familiar with the matter, said on conditions of anonymity that alleged Mexican military officials helped a group of five migrants illegally enter the United States by using a rope ladder.

The agent said the group crossed into the United States but then returned to Mexico when Border Patrol responded to the scene.

Mexican officials were not immediately available to comment on the matter.

On 29 October, acting CBP Commissioner Mark Morgan said US apprehensions of undocumented immigrants at the Mexican border reached more than 970,000 in the fiscal year 2019, marking an 88 percent increase from last year.

The United States and Mexico reached an agreement in June on curbing illegal migration through the US-Mexican border.

Under the deal, the United States vowed to refrain from imposing tariffs on Mexican goods, while the Latin American country committed to deploying its National Guard throughout the country and, especially, to its southern border to fight the influx of undocumented migrants.