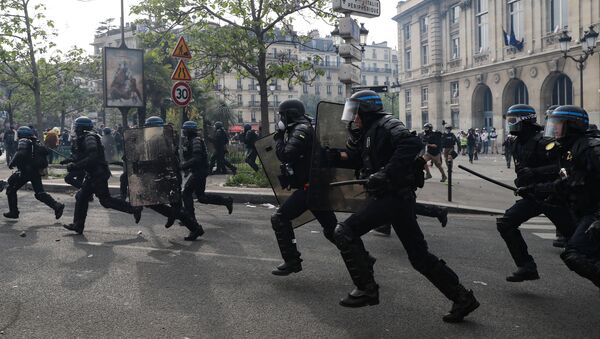 © AFP 2023 / KENZO TRIBOUILLARD
Subscribe
International
India
Africa
MOSCOW (Sputnik) - The Russian Foreign Ministry previously underlined that violence against on-duty journalists is unacceptable and had called on the French authorities to carry out a thorough investigation into the incident.

The Organisation for Security and Co-operation in Europe (OSCE) has started a review of the incident involving the use of excessive force against RIA Novosti journalist Viktoria Ivanova by French police at a May Day rally in Paris, according to the OSCE Representative on Media Freedom Harlem Desir.

"We generally intervene in cases of attacks against journalists during demonstrations, and we try to find precise information each time a case arises. We have been looking at and will continue to study this case," Desir said when asked whether the OSCE planned to promote an investigation into the incident.

Earlier, the French police failed to name the date when the investigating judge would review the case, and when judiciary scrutiny would be initiated.

Ivanova, who was covering the May Day demonstrations, was attacked by police despite wearing "press" tags on her arm and helmet. The journalist received blows to her head and body, inflicted by a baton-wielding police officer. Ivanova sustained a concussion and bruises on her arms.