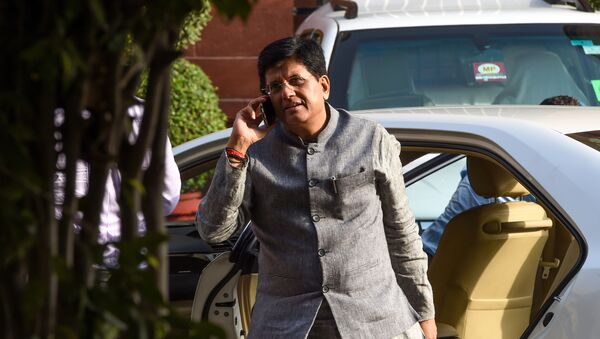 New Delhi (Sputnik): India and the US have been embroiled in a series of trade spats, both bilaterally and at the World Trade Organisation (WTO) since the middle of last year, but this hasn’t stopped them from looking at other viable options.

India's Commerce and Industry Minister Piyush Goyal is likely to undertake a visit to the US on 11 and 12 November presumably to conduct talks on a more significant bilateral trade deal moving forward, reports The Economic Times.

The proposed visit is being viewed as significant following New Delhi's decision to opt-out of the 15-nation Regional Comprehensive Economic Partnership (RCEP) agreement earlier this week due to its key concerns not being addressed.

Next week's trip to the US will be Goyal's second in the last two months. He had earlier visited Washington and New York in September for bilateral trade talks.

During Goyal's visit, the Indian delegation is likely to ask the US to restore the over three-decades-old Generalised System of Preferences or GSP (a preferential tariff system for developing countries) which it withdrew in the first week of June this year, the Indian daily quoted sources as saying.

The US had terminated the GSP on the grounds that India was not providing "equitable and reasonable access to its markets".

Negotiations for an expanded trade deal will include tariff elimination on information and communications technology (ICT) goods and data-related relaxations.

India is also keen on safeguarding the interests of the country's farming community and keeping religious sensitivities in mind while importing products with animal-based feed into their food chain.

Trade talks with the US Trade Representative's (USTR's) office have been ongoing, and both sides are quite optimistic about arriving at a mutually beneficial pact during Minister Goyal's visits to Washington and New York next week.

Bilateral trade between India and the US currently stands at about $150 billion. According to government data available in the public domain, there has been a 10 per cent annual increase. In fiscal 2018-19, Indian exports to the US were an estimated $52.4 billion. Imports from the US to India were pegged at $35.5 billion.