How the Kremlin Was Hidden From Nazi Bombs 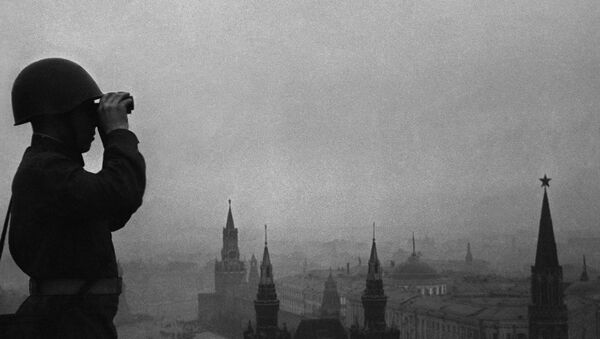 © Sputnik / Anatoliy Garanin
/
Go to the photo bank
Subscribe
During the Second World War, Moscow was bombed 141 times. The main objective of Hitler’s airstrikes was the Kremlin, but it suffered only eight attacks. The bombings caused much less destruction than expected.

This was due not only to the city's successful air defences and the work of Soviet aviation, the Soviet government had another card up their sleeve.

"The issue of ​​camouflaging the Moscow Kremlin was first raised before the war. The Kremlin commander, Nikolai Spiridonov, wrote a note to the Central Committee of the All-Union Communist Party of the Bolsheviks, that is, the highest party organ. It was in May 1939. A similar task was also established in 1941", Sergey Devyatov, advisor to the Director of the Federal Protection Service of the Russian Federation and historian, stated.

On 26 June, a few days after the offensive by Nazi Germany against the USSR began, the Kremlin commander presented his final plan to protect the Kremlin's 28 hectares and buildings to the general commissioner of State Security, Lavrentiy Beria.

The note was accompanied by a draft of the camouflage plan developed by Boris Iofan, an eminent architect of the time, designer of the House on the Embankment and the ideologist behind the “Worker and Kolkhoz Woman” monument.

"Iofan elaborated the possible options to mask the Kremlin. It was his idea to make it completely invisible by merging its vertical structures with the painted fragments that were below them", Sergey Devyatov said.

He explained that "the biggest problems in terms of masking the Kremlin were the tall towers, which are more than 70 metres high, as well as the 82-metre Ivan the Great Bell Tower". Moreover, the triangular shape of the fortress served as an excellent point of reference for the attackers.

The masking works began on 28 June and ended in August, although a decree on measures to camouflage objects in Moscow was made official on 10 July.

"Hundreds of people were involved in the project", Devyatov continued.

The historian clarified that the main work was carried out by military personnel and especially by the Kremlin’s own military regiment.

"In the first place, the masking of the Kremlin provided for camouflaging the fortress’ bright elements, such as the ruby ​​stars, which were extinguished and covered with pieces of canvas; the golden domes of Ivan the Great Bell Tower and the cathedrals were also covered. In addition, both the Ivan the Great bell tower, the cathedrals and the buildings were painted in such a way that it seemed that it was not a single building. Streets and avenues were painted on those buildings", Devyatov explained.

The Kremlin's walls and towers were also camouflaged. The towers were stylized "as residential buildings with a large number of windows; streets were painted on the Kremlin walls".

The Nazi bombers at that time could attack the Kremlin from a height of approximately two kilometres, since at a lower height dense anti-aircraft fire awaited them. The bombings occurred mainly at night. 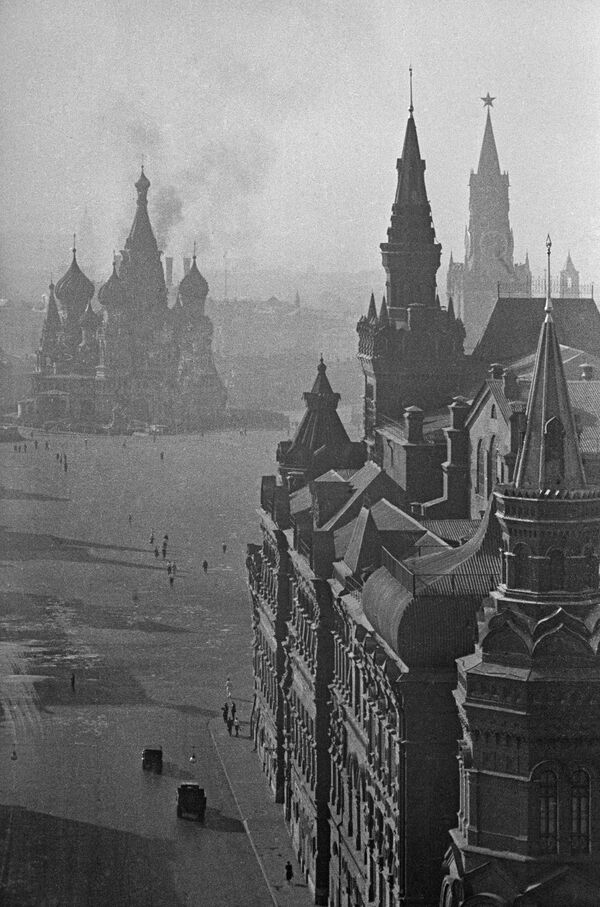 Both types of camouflage gave a good result. This was confirmed by a control observation from a height of 1,000 metres, from different angles.

"In any case, from above, the Kremlin no longer resembled the Kremlin. The triangular design that is familiar to us had ceased to exist", the advisor to the director of the Federal Protection Service said.

Despite the fact that hundreds of people, artists and military, worked to hide the Kremlin, the first bombing, which occurred on the night of 21-22 August, had to be diverted by air defence forces, since the camouflage work wasn’t finished yet. A 250-kilo demolition bomb, filled with ammonia, went through the roof of the Grand Kremlin Palace and fell into St. George's Hall. However, a miracle happened: the bomb didn’t explode. Stuck in the attic, the bomb changed its trajectory, formed a funnel in the ground and fell apart.

"In the place of Lenin’s mausoleum, a two-story mezzanine house was built, imitating 19th-century buildings, made of wood and plywood. In Red Square, several low-rise buildings that mimicked the roofs of residential buildings or warehouses were constructed", the Federal Protection Service advisor said.

Lenin’s body was taken from the mausoleum on 3 July 1941 and returned in 1945. The mausoleum was camouflaged for almost the entire war.

Fake buildings in Red Square were taken down only once during the war. It was for the parade on 7 November 1941. Despite the great risk, Stalin decided not to cancel the parade. According to him, “even the weather helped the Bolsheviks". The festive event coincided with weather conditions unfit for flying.

The dismantling of the imitation buildings was done in one day. After the parade, it took only 24 hours to restore the camouflage.

"In one day, the house that covered the mausoleum and the bleachers was dismantled; at the same time, three false constructions that were in the centre of Red Square were dismantled. Immediately after the parade, they were all put back in their place. The next day, it was reported that the camouflage had been completely restored", Devyatov said.

During the war, not only the Kremlin and nearby buildings were camouflaged, but also other objects visible from the air. One of them was the diversion channel of the Moscow River, created in the 18th century one kilometre from the fortress to protect it from flooding.

"It was decided to transform the channel with barges and draw streets and houses on them", Devyatov explained.

In addition to the centre of the capital, without a doubt, the strategically important targets of the Nazi bombings were plants and factories. 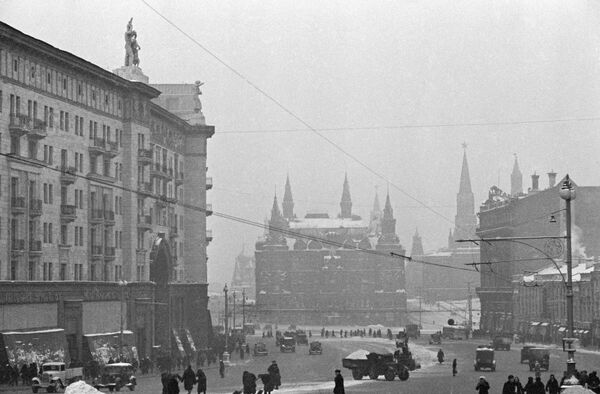 There, the false construction technique also proved successful, architect Konstantin Markus, son of Boris Markus, commissioner of the student camouflage battalion based at the Moscow University of Architecture, said.

"An absolutely wonderful story was when the boys invented fake factories. In the garbage-covered territories of the state bearing plant they imitated buildings with garden lamps, pitched roofs of plywood, wood, etc… and, as if by chance, unmasking these volumes, they left a little light there. During the first bombing, which happened exactly one month later, on the night of 22 July, these fake factories were bombed, but the bearing plant remained intact", Markus said.

Major Japanese Newspaper Urges Russia to ‘Admit’ Soviet-Japanese War of 1945 Was a ‘Mistake’
The whole city was transformed during the Great Patriotic War (WWII). New painted roads and fake buildings made the image of the capital almost unrecognisable to Nazi radars. According to various sources, thanks to the ingenuity of the architects, it was possible to divert approximately one-third of all attacks to false targets.

Although the intense attacks on Moscow lasted until April 1942, the Kremlin's camouflage was removed only at the end of the war in 1945. While removing the camouflage, it turned out that the dark paint that covered the domes of the Kremlin's cathedrals had set, and regaining their original shine cost the restorers a lot of time and effort. These efforts, however, cannot be compared to the feat of having preserved the heart of Moscow.

000000
Popular comments
Russians has always been good at camouflage. Serbs won NATO's war in Kosovo thanks to their skills learnt from Russia. The American fascist regime and it's little eurofag wolfpack hit tonnes of milk bottles, cans and cardboard but not one tank. They were all withdrawn intact.

vargus
7 November 2019, 16:11 GMT4
000000
Newsfeed
0
New firstOld first
loader
LIVE
Заголовок открываемого материала
Access to the chat has been blocked for violating the rules . You will be able to participate again through:∞. If you do not agree with the blocking, please use the feedback form
The discussion is closed. You can participate in the discussion within 24 hours after the publication of the article.
To participate in the discussion
log in or register
loader
Chats
Заголовок открываемого материала
Worldwide
InternationalEnglishEnglishMundoEspañolSpanish
Europe
DeutschlandDeutschGermanFranceFrançaisFrenchΕλλάδαΕλληνικάGreekItaliaItalianoItalianČeská republikaČeštinaCzechPolskaPolskiPolishСрбиjаСрпскиSerbianLatvijaLatviešuLatvianLietuvaLietuviųLithuanianMoldovaMoldoveneascăMoldavianБеларусьБеларускiBelarusian
Transcaucasia
ԱրմենիաՀայերենArmenianАҧсныАҧсышәалаAbkhazХуссар ИрыстонИронауОssetianსაქართველოქართულიGeorgianAzərbaycanАzərbaycancaAzerbaijani
Middle East
Sputnik عربيArabicArabicTürkiyeTürkçeTurkishSputnik ایرانPersianPersianSputnik افغانستانDariDari
Central Asia
ҚазақстанҚазақ тіліKazakhКыргызстанКыргызчаKyrgyzOʻzbekistonЎзбекчаUzbekТоҷикистонТоҷикӣTajik
East & Southeast Asia
Việt NamTiếng ViệtVietnamese日本日本語Japanese中国中文Chinese
South America
BrasilPortuguêsPortuguese
NewsfeedBreaking
15:44 GMTIsrael Will Reportedly Push US to Strike Iranian Facility Amid Lack of Progress in Vienna Talks
15:41 GMTAmerica Unveils First-Ever Strategy to Battle Corruption at Home and Abroad
15:30 GMTChina May Build Military Base in Equatorial Guinea Amid Beijing’s Tensions With Washington
15:15 GMTKremlin: Putin Will Listen to Biden's Proposals on Ukraine 'With Great Interest'
15:15 GMTNYC to Use 'Preemptive Strike' Against Omicron With Vaccine Mandate for all Businesses, Mayor Says
15:08 GMT3,000 Security Officers Guard India's Mathura as Hindu Group Threatens to Install Idol in Mosque
14:59 GMTAmid Rumours of US Boycott of Beijing Olympics, How Could the Move Affect the Games?
14:52 GMTUK Policing Minister Not Surprised Over Reports of Drug Use in Parliament Building
14:45 GMTLabour Unions Protest in Brussels Against Low Wages, Expensive Electricity - Photos
14:26 GMTSpanish Court Rules Employee Can be Fired for Job Abandonment During Pandemic - Reports
14:18 GMTAnger and Shock After Intruders Vomit and Urinate at Site of Manchester Arena Bombing Memorial
14:15 GMTUS, UK, Canada Concerned by Tigrayans Arrested Without Charge in Ethiopia
14:07 GMTLionel Messi, Neymar or Himself: Kylian Mbappe Reveals Who's 'Boss' at Paris Saint-Germain
13:58 GMTFormer Indian Shia Leader Embraces Hinduism After 'Death Threats From Muslim Groups'
13:48 GMTMarine Le Pen Accuses EU of 'Playing Role of Firefighter-Pyromaniac' in Ukraine-Russia Tensions
13:47 GMT'Happy a Team Like Barcelona is Interested in Me', Says Salah Amid Liverpool Contract Impasse
13:30 GMTEarth is Getting Its Own Black Box That Will Tell What Caused Humanity's Demise
12:58 GMTChina Says Plots to Thwart Ties With Solomon Islands 'Doomed' as PM Survives No-Confidence Vote
12:53 GMTPutin in Meeting With Modi, Discusses Drug-Trafficking, Terrorism and Situation in Afghanistan
12:46 GMTSri Lanka Demands Compensation From Pakistan Over Brutal Mob Killing of Factory Manager