Photos: First-Ever Discovery of Mammoth Traps Carved by Humans 15,000 Years Ago in Mexico 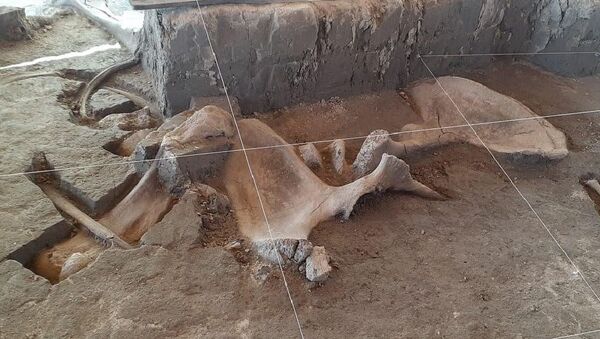 Researchers from Mexico's National Institute of Anthropology and History, during an excavation on land slated to be used as a garbage dump in the Tultepec neighborhood just north of Mexico City, have discovered ancient traps designed for hunting a woolly mammoth.

According to Mexican anthropologists cited by The Daily Mail, the human-built pits, containing the bones of at least 14 mammoths, were dug some 15,000 years ago as a means of allowing hunters to chase the beasts into a trap. Each unearthed trap is reportedly six feet (1,8 meters) deep and 25 yards (22 meters) in diameter.

​Remains of two other species that went extinct in the Americas long time ago - a horse and a camel - were also discovered during the excavations, according to The Daily Mail.

According to widespread scientific theory, the woolly mammoth inhabited vast territories of modern Europe, Siberia and some parts of North America up to about 4000 years ago.

​It is believed that the species primarily disappeared at the end of the so-called Pleistocene period, about 10,000 years ago, although some small populations lived into the time of the pharaohs of ancient Egypt.

Mexican anthropologists note that their finding is unique and suggest that the pits could have been created by ancient humans on the bottom of dried lake Xaltocan, when the water level dropped significantly some 15,000 years ago.

The researchers suggest that the common mammoth hunting tactic involved a group of about 20-30 people armed with pikes and flames surrounding a herd of mammoths. After one or two members of the species were separated from the herd, hunters chased them into the trap and slaughtered the animal with sharpened stones and sticks.

The anthropologists believe that the ancient hunters used the traps for a period of at least 500 years.