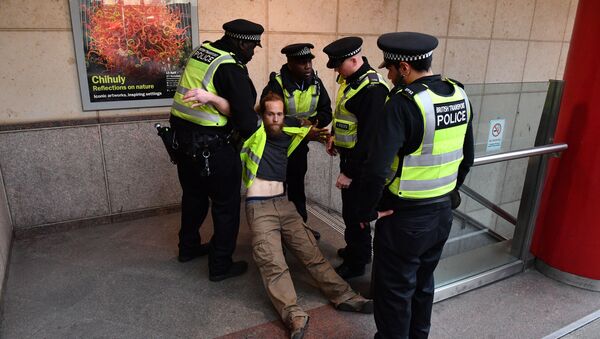 MOSCOW (Sputnik) - The UK High Court on Wednesday ruled that the London police's city-wide ban on protests by the Extinction Rebellion environmental movement was unlawful.

"Separate gatherings, separated both in time and by many miles, even if coordinated under the umbrella of one body, are not a public assembly within the meaning of (the act)," the court ruled.

Under such interpretation of the law, "the decision to impose the condition was unlawful because there was no power to impose it," according to the judges.

On October 14, the Metropolitan Police Service (Scotland Yard) issued a ban on any assembly of more than two people tied to the movement's Autumn Uprising protests, which were planned to take place from October 7-19.

The ban was introduced under section 14 of the 1986 Public Order Act, which allows the police to regulate public events provided that there is a reasonable belief that an event in question could lead to serious public disorder, property damage or other unruly acts.

Scotland Yard's decision caused no small amount of controversy, with some human rights activists accusing it of imposing unreasonable limitations on people's right to protest. Nevertheless, the police stood by its decision, claiming that the impact of the previous protests warranted such a measure.

In recent months, Extinction Rebellion has been actively staging protests in attempts to bring the public's attention toward global warming, which they refer to as a "climate emergency."