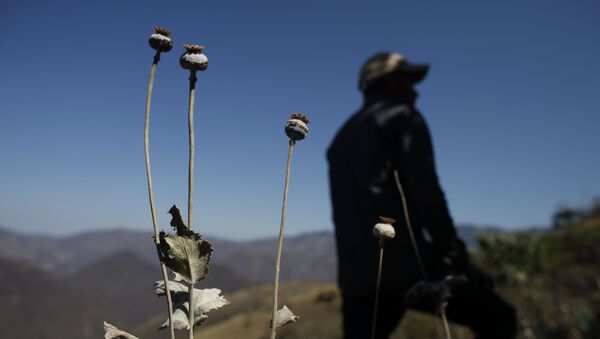 © AP Photo / Dario Lopez-Mills
Subscribe
Following the murder of nine US citizens in northern Mexico Monday, US President Donald Trump offered to send US troops into Sonora. However, Mexico is moving, however slowly, away from the drug war model that has only fueled murders like these and benefited a select few in Washington.

“If Mexico needs or requests help in cleaning out these monsters, the United States stands ready, willing & able to get involved and do the job quickly and effectively,” Trump tweeted on Tuesday, adding that “the cartels have become so large and powerful that you sometimes need an army to defeat an army!”

"The worst thing you can have is war ... We declared war, and it didn't work ... That is not an option,” Mexican President Andrés Manuel López Obrador responded. Since his election in 2018, AMLO has emphasized a new strategy in the struggle against the powerful drug cartels in the country: rather than pushing the distratrous drug war begun by then-President Felipe Calderón in 2006, he elected to give amnesty to poor drug producers.

“The objective of the amnesty is to close the cycle of violence without going through impunity … the amnesty can only be the product of a law, there are no unilateral decisions … It is also absurd to think that rapists or large drug traffickers will benefit from it,” Mexican Secretary for Security and Civilian Protection Alfonso Durazo said in an April 2018 interview, El Sol del Centro reported at the time.

“It is a law that is made to be able to attend to the victims who are peasants, who are people who are in jail as young people and elderly people who are there because the system has them in a corner” thanks to previous governments, Tatiana Clouthier, who managed AMLO’s successful presidential campaign, explained at the time.

Laura Carlsen, director of the Americas Program for the Center for International Policy, told Radio Sputnik’s By Any Means Necessary Wednesday that while the evidence of the bankruptcy of Trump’s militarized solution is plainly evident, Mexico City hasn’t stepped far enough away from its heavily militarization at the height of the drug war due to AMLO’s fear of overly antagonizing the United States. As a result, massacres like Monday’s continue to occur.

“This is a great concern here in Mexico, and the president, Andrés Manuel López Obrador, has responded by saying that Mexico is a sovereign state and that he will not return to this drug war model of fighting violence with violence that actually detonated the kind of violence that we’re seeing today in both the … capture and release of Ovidio Guzmán and also this massacre of a family on the border of the states of Sonora and Chihuahua close to the US border.”

The son of infamous drug lord Joaquín "El Chapo" Guzmán, Ovidio is himself suspected of being in the high leadership of the powerful Sinaloa Cartel, based in the Mexican state of the same name, his father once ran. El Chapo is currently serving a life sentence in a US prison.

“The whole narrative that the problem is exclusively in Mexico has ever since the launching of the drug war in December of 2006 been a narrative that does two things in the United States. First of all, it has justified this huge level of intervention, where after the drug war was launched by Mexico and the United States - a model that was developed in the United States for social control primarily - we had this huge increase in the number of US agents and the size of the US embassy here in the country, and their influence over national security.”

That influence isn’t just because of the cartels, though: the North American Free Trade Agreement gave the Pentagon an opportunity to “push the US security perimeter down to the southern border of Mexico,” Carlsen said, turning Mexico into a “buffer zone for its own security interests.”

“And I’m not going to say US national security, because the security interests of the Pentagon and of the government, particularly this government of Donald Trump, are not the same as the security interests of the nation considered as the population of the United States. This we know because we’ve seen billions and billions of dollars poured into fortifying a border that has no effect whatsoever on the security of the population, and yet drains money out of social programs that are hugely needed for many people throughout the country.”

Carlsen noted this approach takes the responsibility off the US government for addressing transnational crime within its own borders. Instead, Washington treats it as “some kind of contagion that comes up from Mexico.”

“Anyone who has the slightest understanding of transnational crime and knows that there’s a multibillion-dollar market of prohibited substances in the United States is quite aware that the problem is located in many countries and in many different places,” she said.

“It’s a huge concern that Trump is once again talking about sending the Army in. The president here ... has been walking a fine line of trying to keep relations with Donald Trump as cordial as possible. There have been times when Mexicans have been very critical of this strategy because Trump is openly hostile to Mexican interests, but the government seems to think that it’s very important to be friends with Donald Trump, and so they portrayed this as, ‘Well, thank you for the offer but no thanks.’”

Host Eugene Puryear noted that the US has already been sending the military into Central America for decades as an ostensible solution to this problem, and it hasn’t solved anything, but only made the problem worse.

“This is a model that was imposed by the United States, adopted by the conservative government, and that the results have been catastrophic. There are more than 250,000 homicides directly related to it, and there are recognized more than 40,000 people disappeared in the context of this war,” she said, explaining that “when they send out the armed forces, and particularly in the context of the high level of corruption and the lack of [justice] that exists here, it destabilizes illegal businesses - very important, powerful illegal businesses, heavily armed with US arms - and you begin to have these turf wars.”

“So they know that this strategy itself has, in fact, led to the increase of violence. You’ll find that even promoters admit it and continue, after more than 12 years, to talk about that ‘we’re just in the darkness before the dawn,’ to talk about the ‘light at the end of the tunnel,’ but try explaining that to people who have lost family members or are searching for disappeared sons or daughters,” Carlsen told hosts Puryear and Sean Blackmon.

“It’s time for a change; the president recognized that,” she said. “It failed, it clearly failed, it was counterproductive for the country … However, we’re not seeing the same thing in practice. We are still seeing militarization as a response to security; we’re still seeing a national guard that’s heavily militarized instead of being a civilian force; we’re seeing very slow progress in terms of restoring the justice system. And although there’s agreement that the root causes are deep and are longer-term - they have to do with inequality, they have to do with poverty, and of course they have to do with the justice system. Still, many people, myself included, were hoping to see concretely a change in strategy that was much more marked than what we have so far … There is a good line, but the practice is incoherent and inconsistent with that.”

She noted that the drug war in the US has played its intended role as a social control tool exceedingly well: it fueled the growth of mass incarceration, putting huge numbers of Blacks and Latinos behind bars.

“It’s a farce of a war, because what it really protects is interests in the illegal businesses themselves at the highest spheres of government and among so-called ‘legitimate’ economic powers, and also the arms industry itself,” she noted. “The drug war is unwinnable - everyone knows it - so that means you have a perpetual war, and a perpetual war is a perpetual market” for both arms and surveillance equipment.

000000
Popular comments
The Yankee drug war is a sham. CIA itself deals in drugs to fund ultras and opposition political parties in target nations.