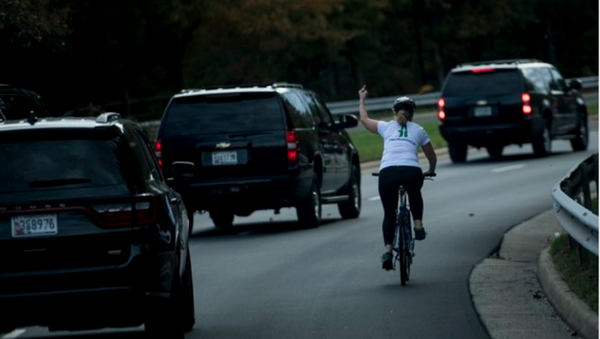 Juli Briskman, the bicyclist who rose to social media fame for presenting US President Donald Trump’s motorcade the one-finger salute, now holds political office herself after defeating a Republican incumbent in the state of Virginia.

Tuesday night’s legislative election results brought major wins for Democrats in states such as Virginia and Kentucky - despite Trump’s Monday night pleas to voters in the latter state.

One local victory that piqued the interest of netizens nationwide was the winning of a seat on Virginia’s Loudon County Board of Supervisors by Briskman, who is no stranger to being in the public eye after she went viral and lost her government contractor job with Akima, LLC, for flipping off Trump’s motorcade back in November 2017.

​"He was just passing by and my blood just started to boil," Briskman told the Huffington Post shortly after she was fired. "I'm thinking, ‘DACA recipients are getting kicked out. He pulled ads for open enrollment in Obamacare. Only one-third of Puerto Rico has power.' I'm thinking, ‘He's at the damn golf course again.'"

Despite the loss of her job, the Northern Virginia resident was able to gain tens of thousands of dollars in donations via GoFundMe following her firing and also recouped severance pay after filing a lawsuit against her former employer.

According to a 2018 interview, the thought of running for office did not cross Briskman’s mind until she was terminated from her job. Nevertheless, Briskman decided to use her well-known bird-flip as leverage as she canvassed and ran on a platform of expanding funding for the county’s schools and increasing local government transparency.

A little over one year later, Briskman, a Democrat, won her race for the Algonkian District seat on the Loudon County Board of Supervisors, beating out Republican incumbent Suzanne Volpe by 8 percentage points.

“Two years ago I was fired for standing up to the backwards agenda of Donald Trump. But now my neighbors in Algonkian District have backed me up and rejected the Trump agenda,” Briskman told the HuffPost Tuesday. “We worked really hard on this campaign. It was a tough race. I’m excited to create a Loudoun County that works for everyone.”

However, November 5 wasn’t only a big night for the woman who flipped off the motorcade: Virginia as a whole flipped from red to blue as Democrats regained control of the state legislature and governorship for the first time in 26 years.