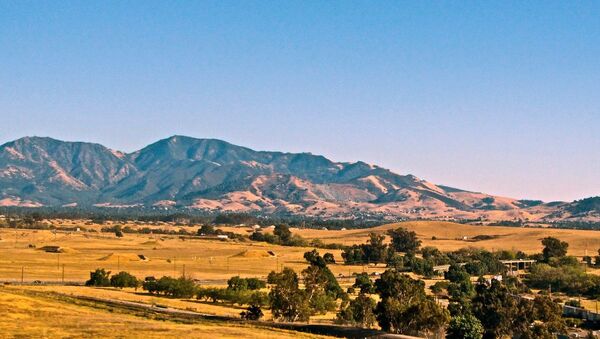 © Flickr / ellenm1
Subscribe
Eyeing “one of the largest contiguous pieces of land” in the San Francisco Bay area, developers are hoping to turn a former US Navy munitions storage site into a planned community of the future.

The Concord Naval Weapons Station sits about an hour’s drive from San Francisco. Formally abandoned in 2005 but de facto unused for years before then, the area once housed munitions for the US military. Now, land development company Lennar has proposed building a new, 13,000-home community on roughly 2,300 acres of the former base, incorporating many of the storage bunkers into the new street plan.

"In terms of the Bay Area, this is certainly one of the largest contiguous pieces of land that is available for this kind of planning," Skidmore, Owings and Merrill Design Partner Craig Hartman, the project's lead architect, told Business Insider, noting that "this will not solve the Bay Area's problems by a long shot.”

The rolling hills to the north of Concord, a city of 130,000 people, are dotted with bunkers organized in long and orderly rows that once housed explosive munitions for the military. 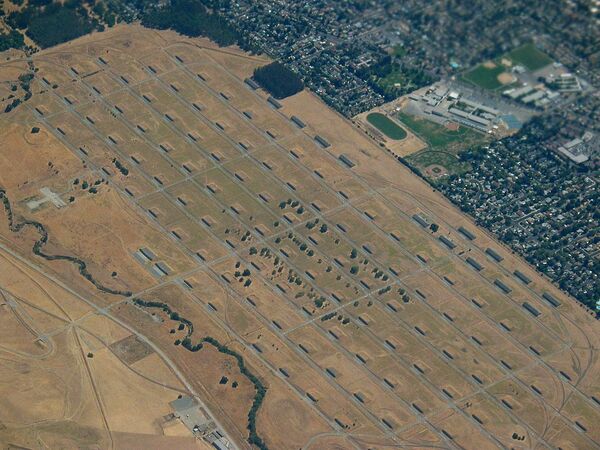 However, Concord’s former mayor, Edi Birsan, has derided the land as “not suitable for public habitation.” Years of weapons storage at Concord have left hazardous waste at the site that the Navy has been struggling to clean up since the 1980s, labeling it a Superfund site. Soil on the roughly 1,200 contaminated acres includes a radioactive form of chromium, and the groundwater is tainted with industrial chemicals like trichloroethene and tetrachloroethylene, Business Insider noted.

The US Environmental Protection Agency has said the groundwater isn’t safe, but the land itself doesn’t present much of a risk to human health.

Concord might be best known for the 1944 Port Chicago disaster, when a munitions explosion at the coastal adjunct for the station killed more than 300 dock workers, most of whom were black, and leading to a large mutiny when safety concerns went unmet.

There’s also a network of rusting rail sidings leading to what seem to be revetments for parking rail cars separately, in order to contain any potential explosion. Fed by a similarly rusting railyard, the city estimates that scrapping their steel could put as much as $4.1 million toward the project’s funding. 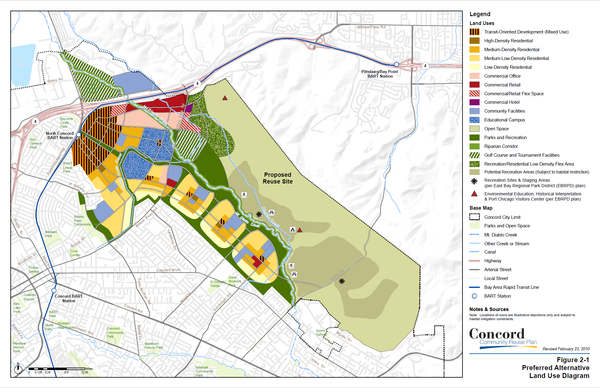 Planning about what to do with the site began shortly after the Navy abandoned it, arriving at an area plan for the reuse project in 2012, the product of years of meetings and public workshops. Agreed upon goals for the community-to-be include a balanced approach to conservation and development, economically viable and sustainable development and a high quality of life for all its residents, according to the project’s website.

“We were attracted by the possibility of thinking about how to make suburban experiences more communal,” Hartman told the San Francisco Chronicle. “You want the right kind of density in the right places. ... It’s such an extraordinary site.”

One-quarter of the residences will be affordably priced, according to the plan, such that lower-income families and individuals would not have to spend more than 30% of their total income on housing.

Tentative zoning plans for the community include 6 million square feet for commercial space, mostly near the Bay Area Rapid Transit (BART) train station on the edge of the town, as well as 2.3 million square feet for an academic campus of some kind, which might become either a university or research center. Some of the shops might be built out of former storage bunkers for novelty’s sake, but most will be demolished.

Mixed density housing along a primary transit spine would provide easy access to the BART station via shuttle buses, bicycle paths, or by foot. The majority of the former base, 65%, will remain unused or become part of the 2,500 acres of parks, according to the East Bay Times.

Construction is planned in three phases, Mercury News reported, and could take up to 35 years.