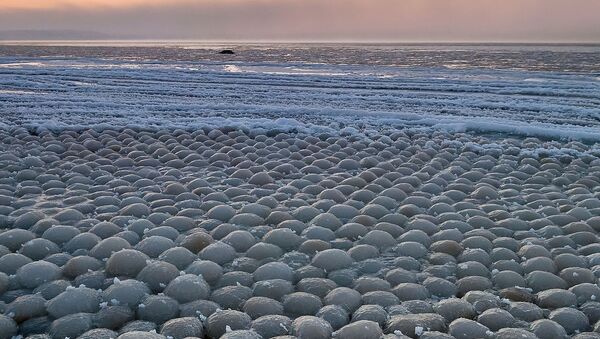 Pictures of freaky “eggs” of various sizes captured by Oulu resident and amateur photographer Risto Mattila during a stroll on the nearby beach Marjaniemi in Ostrobothnia have become an Instagram hit.

By his own admission, this is is the first time Mattila has encountered this 30-metre assemblage of oval egg-shaped ice floes in the 25 years he has been living near the sea.

“My wife and I stood there marvelling at the remarkable natural phenomenon. Since I had a camera with me I decided to preserve this unusual sight for posterity”, Mattila told national broadcaster Yle.

Pictures of the weird formations, later published by Yle, left the Finnish public mystified and scratching their heads over how these may have appeared. Some joked about eggs without a hen to brood them.

Ice specialist Jouni Vainio of the Finnish Meteorological Institute explained that while indeed rare, the “ice eggs” have a perfectly scientific explanation.

To appear, they require a seldom seen combination of near-freezing air and water conditions.

Viral
'Glitch in the Matrix?' 'Ghost Island' Out of Nowhere Baffles Finns (PHOTO)
The “eggs” are formed around a tiny particle revolving in the frigid ebb and flow, such as a snowflake, a small stone or even a bit of flotsam, with ice slowly growing around it and getting polished by the back-and-forth movement of the water. The right amount of wind is key.

“Too much wind would prevent the ball from forming. On the other hand, if calm, the water would just freeze on the beach in an even layer”, Vainio continued.

He also stressed that Mattila was lucky to encounter the eggs, because they only tend to appear for a short period of time, either melting down or congesting into a large chunk of ice, where individual objects are no longer discernible.