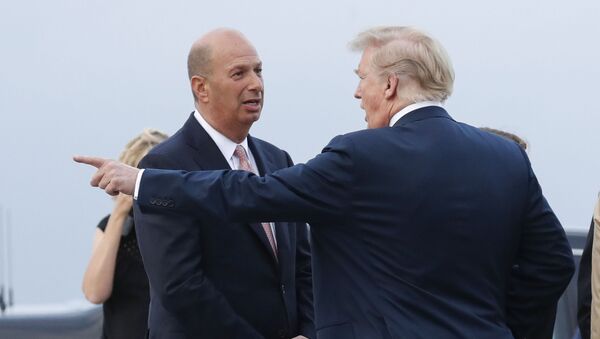 On Tuesday, US Ambassador to the European Union Gordon Sondland revealed for the first time that he had previously communicated to a top Ukrainian official that the Trump administration would likely withhold aid in the absence of its requested probe of former US Vice President Joe Biden.

In four new pages of sworn testimony to Congress released Tuesday but given the day prior, Sondland described how he laid out an understanding of quid pro quo to Andriy Yermak, a top adviser to Ukrainian President Volodymyr Zelenskyy: US aid to Ukraine could be at risk if Kiev didn't publicly commit to the Trump administration's requested investigation of Biden.

Sondland's testimony was based on a review of other depositions given to a slew of House committees heading up the impeachment inquiry into US President Donald Trump by William Taylor, the charge d'Affairs for the US embassy in Kiev, and Tim Morrison, a top official on the National Security Council.

In 2016, as Biden later boasted, the then-vice president himself pressured the Ukrainian government, via aid withholding threats, into ending then-Special Prosecutor Vyktor Shokin's anti-corruption probe into Burisma Holdings, an oil and gas company doing business in the Ukrainian sector on the board of which Hunter Biden, the vice president's son, sat at the time. Shokin was fired by Kiev shortly thereafter, ending the probe.

READ: Sondland submitted this amendment to his testimony, saying other witnesses refreshed his recollection tha tmilitary aid was withheld as part of Trump's push to get a Biden investigation going. pic.twitter.com/AnQsm0P2Ag

​Sondland noted that, while in his previous testimony, also released on Tuesday but conducted on October 17, he claimed to have told Taylor there wasn't to be a quid pro quo from Trump, reading Taylor's and Morrison's statements "refreshed my recollection about conversations involving the suspension of US aid."

Several other transcripts and phone call recordings were released on Tuesday by the chairs of the House Intelligence, Foreign Affairs and Oversight and Reform committees, including testimony by former US Special Envoy to Ukraine Kurt Volker.

In a statement accompanying the release of the transcripts, Intelligence chair Adam Schiff, Foreign Affairs chair Eliot Engel and acting Oversight and Reform chair Carolyn Maloney said that with the new revelations, "the president's scheme comes into clearer focus."

“The testimony of Ambassadors Volker and Sondland shows the progression of efforts by the President and his agent, Rudy Giuliani, to use the State Department to press Ukraine to announce investigations beneficial to the President’s personal and political interests," the joint statement reads. “It is clear from their testimony that, in exchange for the statement, President Trump would award the Ukrainian president with a highly coveted White House meeting and, later, with millions of dollars in critical military aid being withheld."

“Finally, with the release of the full production of text messages provided to the Committees by Ambassador Volker, and an additional declaration by Ambassador Sondland, the President’s scheme comes into clearer focus," they said.

Volker's testimony, given on October 3, notes that he believed that Biden pressuring Kiev to fire Shokin "was widely understood internationally to be the right policy.”

The former envoy also described the growing involvement by Giuliani, Trump's lawyer who holds no government office, in US-Ukraine affairs, positioning himself as someone who could give Ukrainian officials a more direct connection to Trump's ear than embassy diplomats. He also noted his attempts to convince Giuliani and his associates that the allegations against Biden were “simply not credible." He described Trump's July 25 phone call with Zelenskyy, which helped fuel the impeachment inquiry, as  “quite a surprise,” “extremely unfortunate” and “explosive.”

Tuesday evening, White House Press Secretary Stephanie Grisham issued a statement in response to the contents of the published transcripts.

“Both transcripts released today show there is even less evidence for this illegitimate impeachment sham than previously thought. Ambassador Sondland squarely states that he 'did not know, (and still does not know) when, why or by whom the aid was suspended,'" Grisham said. "He also said he 'presumed' there was a link to the aid - but cannot identify any solid source for that assumption."

"By contrast, Volker’s testimony confirms there could not have been a quid pro quo because the Ukrainians did not know about the military aid hold at the time. No amount of salacious media-biased headlines, which are clearly designed to influence the narrative, change the fact that the President has done nothing wrong," she continued.