He is Back! Elon Musk Returns to Twitter After…Four Day Disappearance 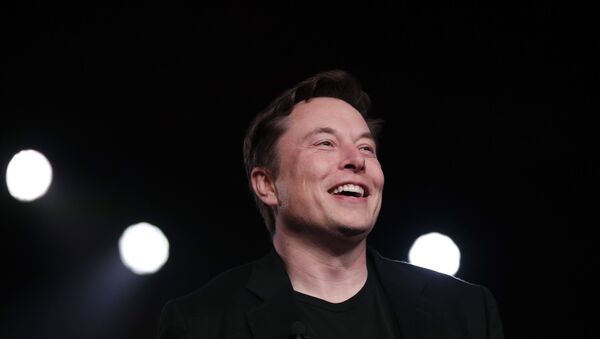 © AP Photo / Jae C. Hong
Subscribe
International
India
Africa
If there’s anyone who can compete with PewDiePie and Kylie Jenner in setting Twitter ablaze it’s Elon Musk, so you can imagine what happened when the 48-year-old engineer and business maverick announced he would abandon the social media platform.

Netizens, stop eating Xanax because tech visionary Elon Musk has returned online after a 4-day self-imposed exile. Musk, who uses his Twitter account to make announcements about and discuss his companies’ projects with social media users and of course post memes, shocked his 29 million army of followers on 1 November, when he praised Reddit and cast doubt on Twitter, announcing he would be going offline.

​His tweet caused waves of comments from social media users asking what had prompted him to abandon Twitter with other netizens begging him to stay.

But on 5 November the tech visionary returned online and retweeted a SpaceX video from 3 November showing tests of the company’s upgraded parachute system for its Crew Dragon aircraft. The video demonstrates how Mark 3 systems can safely land aircraft in the event of a parachute failure. This was the 13th successful test in a row. Netizens were overwhelmed with joy after seeing Musk return to the social media platform.

Incidentally, this is not the first time Musk has “disappeared” from Twitter. In June, the Tesla CEO announced that he had deleted his account although it remained active. In October, Musk tweeted he would go offline for a few days without giving any reason.

His beef with a British caver over Musk’s concept of a mini-submarine led to a lawsuit, while his tweet in August of 2018 in which he announced plans to take “Tesla private” resulted in the US Securities and Exchange Commission fining the tech visionary and Tesla $20 million each and Musk stepping down as the company’s chairman.