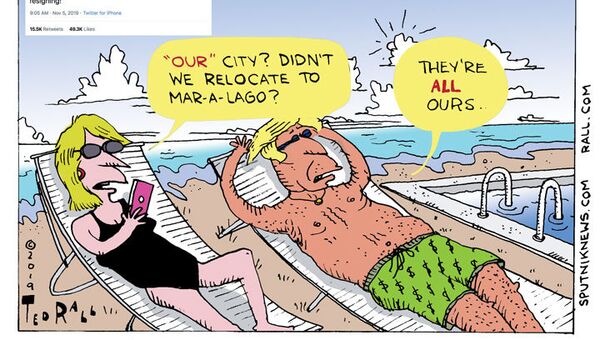 Not long after announcing his departure from New York as his permanent residence outside of the White House, US President Donald Trump decided to dig into the New York Governor Andrew Cuomo and New York City Mayor Bill de Blasio over the state’s bail reform and the Big Apple’s current condition.

At the top of the year, the state of New York’s bail reform law will go into effect, eliminating money bail and allowing those accused of an array of misdemeanors and non-violent felonies to walk free until their court date. However, according to Fox News, some 900 inmates from the state will be released under similar guidelines as soon as next month.

According to Vera Institute of Justice, the pretrial jail population in New York will drop by at least 40% following the law’s implementation.

De Blasio rejected Trump’s assertion that the city of New York was “rapidly” declining under his watch and argued that the community is actually safer without Trump around.

New York City’s never been safer and not just because you finally left town.

Our commissioner worked tirelessly to bring police and communities together. We’re safer than ever because we let safety and fairness walk hand in hand — and rejected the rhetoric of crooks like you. https://t.co/fxvMWCaDMf

Cuomo’s spokesperson, on the other hand, said the governor had “no knowledge” of the early releases reported by Trump and various news outlets, according to the New York Post.