Warren's 'Medicare for All' Attacked by Both Reps and Dems, Also Parodied on SNL Show 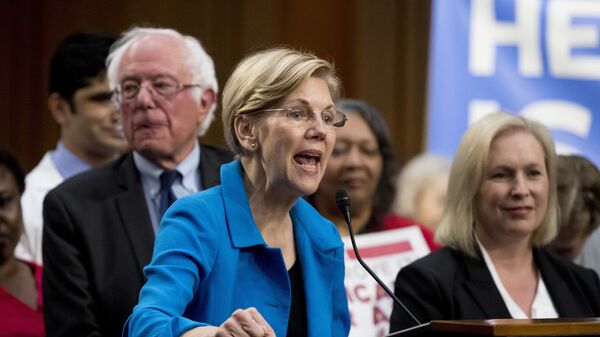 © AP Photo / AP Photo/Andrew Harnik
Subscribe
International
India
Africa
According to the 2020 presidential candidate, Warren's $52 trillion healthcare plan envisions replacing private health insurance with a fully government-subsidized one. To guarantee the plan, Warren vows ''not to raise taxes one penny on middle-class families'' and instead to hit US billionaires.

2020 Democratic presidential candidate Elizabeth Warren, who comes from the so-called ''progressive wing'' of the party, came under attack both from opposing Republicans and fellow Democrats for her 'Medicare for All' plan, while the popular TV show ''Saturday Night Live'' also made a parody of her healthcare proposals.

Warren has been continuously criticized for failing to provide a detailed explanation for how she is going to pay for her healthcare policies, while her new plan released on 1 November claims to avoid increased taxes on middle-class citizens.

Everyone: So how much will you raise taxes to pay for Medicare For All?

For the cost of Elizabeth Warren's $52 TRILLION Medicare-For-All plan, we could build the Wall 2,000 times over

​Republicans are not alone in their critiques of Warren's proposal, as her co-runner from the Democratic Party Bernie Sanders, also from the socialist wing, has claimed his healthcare plan is far better.

Sen. Warren's 'Medicare for All' also came into the spotlight on the latest episode of NBC's "Saturday Night Live" comedy show, where she was parodied by Kate McKinnon.

"When Bernie was talking 'Medicare for All', everybody was like 'Oh cool' and then they turned to me and they said 'Fix it, Mom. I'll do it because that's what Moms do", McKinnon said as she was potraying Warren on TV.

'Billionaires Can Afford It' Healthcare Plan

When asked how she defines the ''middle class'' in her plan, Warren responded she would not raise taxes on anybody ''except billionaires'', of whom there are less than 1,000 citizens in the United States.

"And, you know what, the billionaires can afford it and I don't call them middle class'', Warren told CBS News reporters on Sunday.

Warren was also asked what Americans working in private insurance should do after this sector is replaced.

''Some of the people currently working in health insurance will work in other parts of insurance. In life insurance, in auto insurance, in car insurance", Warren replied as she was attending the campaign trail on Friday in Des Moines, Iowa.

Warren's 'Medicare for All' is a central point of her 2020 election campaign and suggests eliminating private health insurance and replacing it with one fully sponsored by the government. It would also envision cutting defence spending and immigration reform to increase revenue from newly arriving immigrants.

Many are afraid that under Warren's plan, US taxpayers would be forced to pay more in taxes, while some politicians openly claim that her proposals are impossible.

Biden camp not buying Warren's MFA math: "The mathematical gymnastics in this plan are all geared towards hiding a simple truth from voters: it's impossible to pay for Medicare for All without middle class tax increases."

How you finance #MedicareForAll matters A LOT.

For example, many options could lift marginal rates to or above revenue-maximizing levels, leaving little tax capacity to fund much of anything else. https://t.co/eIP40nc1N8