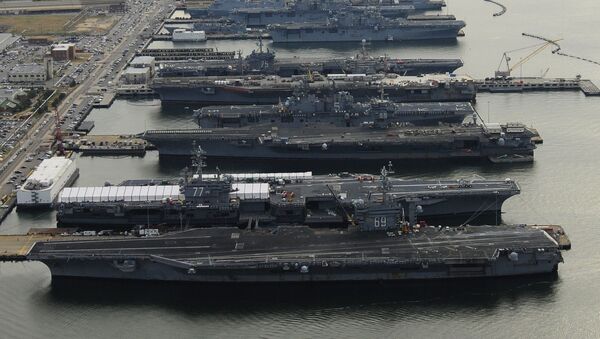 © MC2 Ernest R. Scott
Subscribe
As every East Coast aircraft carrier remains docked and maintenance deadlines pass by, the US Navy recently confirmed they have been exhausting all options and even called upon Carnival Cruise Line for repair advice and tips.

It was revealed last week that all six aircraft carriers based on the US’ East Coast were docked in Virginia at Naval Station Norfolk, for everything ranging from refuelings and repairs to full-blown overhauls. One West Coast aircraft carrier is also drydocked.

In an effort to remedy the present situation and prevent a future pileup of carriers, the US Navy has branched out and tapped into new sources of naval knowledge.

Speaking to Business Insider, Naval Sea Systems Command chief Vice Adm. Tom Moore revealed his branch met with numerous experts and executives of Carnival Cruise Line "a few months back," reported Task & Purpose. A spokesman for the cruise line later backed up Moore’s statement and told the outlet that they spoke about how the cruise line has “been able to do shipyard maintenance as quickly and effectively” as they do.

Though the idea of Carnival Cruise Line, which carries the largest amount of vacationers annually, partnering up with the Navy sounds odd, Cmdr. Sarah Higgins, the spokesperson for Navy Secretary Richard Spencer, said the military official "believes the Department of the Navy must make every effort to retain and expand our competitive edge."

In fact, Carnival Cruise Line is not the only company tapped by the Navy.

Last month, Spencer, who once put his job on the line for the still-behind-schedule USS Ford, had a lot to say about lawmakers such as Rep. Elaine Luria (D-VA) - a harsh critic and US Navy veteran who has taken the branch to task several times in recent months and recently said she does not see an "end in sight” for the USS Ford’s maintenance.

“Leaders in Congress who make disparaging comments against a platform [for which] we’re developing new technologies – you could not ask for a better disinformation program for our competitors,” he said on October 23 at the Brookings Institute, as reported by Breaking Defense. “And I truly mean that.”

The USS Carl Vinson, the aircraft carrier receiving repairs on the West Coast, made headlines last month after Naval Criminal Investigative Service (NCIS) agents determined a third-class petty officer shot himself earlier this year after showing off in a “joking fashion.”

Kitsap Sun reported witnesses told NCIS that the sailor was known to play a “game” of sorts to “elicit a reaction from others” and would "unholster his weapon, position it towards his mouth, and pull the trigger, while smiling.” However, this time in particular, the gun was loaded and discharged.

Luckily the gunshot was not fatal and the officer received a reduction in rank and 30 days of “restriction.” The location of the gunshot wound on the sailor’s body remains unknown.

000000
Popular comments
US Navy better ask the Chinse on how to build and repair ships. They got a lot more experience then the America shipyards and can do it better, faster and cheaper AND the ships will work from the start.