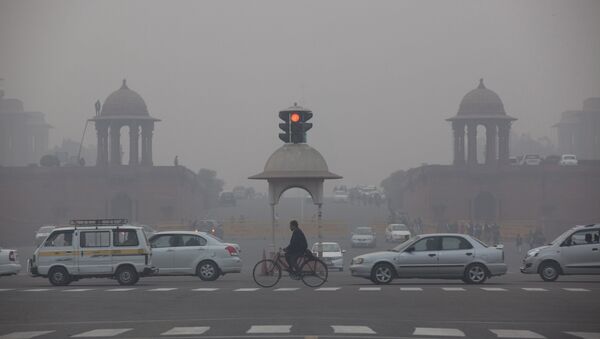 New Delhi (Sputnik): The Indian capital region has been experiencing its worst air pollution yet, forcing the Prime Minister’s office to intervene and ask its top bureaucrat to monitor the situation on a daily basis.

As the air pollution situation has started getting worse, the government of India's capital Delhi had announced a road rationing scheme to bring down vehicular traffic on roads in a bid to curtail air pollution.

The total number of vehicles on Delhi roads was almost 11 million as of 31 March 2018, according to a survey presented by the city government in the provincial legislature early this year. Additionally, thousands of vehicles enter the city daily from the neighbouring states. While the overall growth in the number of vehicles in Delhi was 5.81 percent, the percentage of households using bicycles as a mode of transport has dropped by 7 percent.

As per the road rationing, known as Odd-Even Scheme, only vehicles ending with even numbers will be allowed to drive on even dates and odd numbered vehicles will drive on odd dates.

On Monday morning, the Air Quality Index in New Delhi recorded 588, crossing the “severe” category warning, while in the neighbouring Noida in Uttar Pradesh, it was 774 and in Gurugram in Haryana it was 551.

The Air Quality Index measures the concentration of toxic particles that are less than 2.5 microns in diameter and can be carried deep into the lungs, causing deadly diseases including cancer and cardiac problems.

On Sunday, the Principal Secretary to the Prime Minister convened a high-level meeting with representatives of Delhi and neighbouring states to tackle air pollution. “The meeting comes in the wake of the increasing air pollution levels leading to an emergency-like situation in the NCR,” reads an official release after the meeting.

The federal government has also set up about 300 teams in the field to monitor the situation in industrial clusters, major traffic corridors in the national capital region.

On 1 November, a statutory panel set up by the Supreme Court of India declared a ‘Health Emergency’ in the national capital. Environment Pollution (Prevention and Control) Authority (EPCA) banned construction activities in the national capital and its satellite regions as well as hot mix plants, stone crushers, and all coal and other fuel based industries, except power plants or industries using piped natural gas until 5 November.