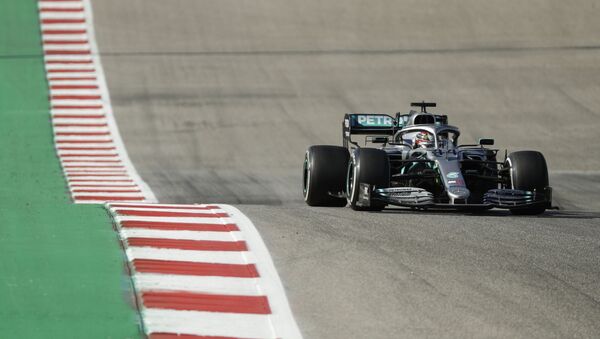 © AP Photo / Eric Gay
Subscribe
International
India
Africa
British racing star of the Mercedes team, Lewis Hamilton, became the champion of Formula 1 for the sixth time in his career following the results of the US Grand Prix.

Hamilton, who won the world title for the third year in a row, surpassed the legendary five-time champion, Argentina's Juan Manuel Fangio, and is now behind only to the seven-time champion, Germany's Michael Schumacher.

"Still we rise guys, still we rise. Thank you so much, guys - we did an incredible job... I can't believe it," Hamilton said after finish.

"[It's an] overwhelming [feeling]. It was such a tough race today. Valtteri did a fabulous job today" #USGP 🇺🇸 #F1 pic.twitter.com/u2S3a4JLlg

Hamilton finished the US Grand Prix second, behind his teammate Valtteri Bottas of Finland, while Dutch racer Max Verstappen was third.